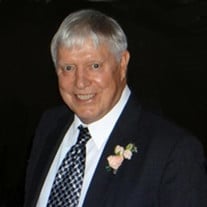 Marvin Joseph Montag, 85 of West Bend died March 14, 2019 in Sioux Falls, SD after a sudden illness. Services will be held, Tuesday, March 19, 2019, 10:30 am at Sts. Peter and Paul’s Catholic Church, West Bend with burial to follow in the West Bend Cemetery. Visitation is from 4pm to 7pm on Monday, March 18, 2019 at the church with a Knights of Columbus rosary to follow. A prayer service will immediately follow the Rosary. Harris Funeral Home of West Bend is assisting the family. Marvin Joseph Montag, the son of Aloysius (Ollie) and Agnes (Duffy) Montag, was born October 10, 1933 in West Bend, where he was raised and educated, attending parochial school through the 8th grade and graduating from the West Bend High School in 1952. During his younger years he worked at Montag Brothers Ford garage in West Bend, where his father and Uncle Leo (Jap) Montag were owners. He also worked for area farmers in the summer. Marvin and his twin brother Mark served their country in the Armed Forces after the Korean Conflict. While stationed in Virginia the brothers met and married their wives. Marvin was united in marriage with Allie Bernice Crowder on May 5, 1956 in Alexandria VA. The couple moved back to West Bend, Marvin worked for Montag Brothers as a mechanic. When the Ford garage changed hands over the years he worked for Don Holland Ford and Korte Ford, and then the West Bend Elevator Service Station until 1985. Marvin was also the CDO (Chief Dishwashing Officer) and handyman at the restaurant that he and Allie owned and operated, Montag’s Restaurant from 1975 to 1985. The couple also managed the West Bend Country Club for the first year that it was open. In 1985 Marvin and Allie moved to Florida where he was a mechanic for Firestone, Fairway Chrysler, and Car Max. He enjoyed hosting friends and family visiting them in the sunshine state, NASCAR races, fishing, traveling, and doing home and yard projects. Marvin and Allie enjoyed living in Florida but their heart was always in West Bend, in 2005 they retired and moved back to West Bend. After Allie passed in 2007 Marvin and Mark were inseparable, they traveled through Europe twice. The two often traveled the United States transporting vehicles for West Bend Ford now owned by his son Ed and grandsons Jeffrey and James. Along with many other trips together, they were often seen driving their mopeds together including quick trips to a popular “watering hole” in Whittemore. After losing Mark in 2017 he continued traveling with his friend Martha Wells of Emmetsburg, IA. He enjoyed meeting with friends for coffee every morning and spending time with grandchildren and great-grandchildren. Marvin is survived by his children: Aline(Gary) Lauck of West Bend, Ed Montag (fiancée Mary Gerhart) of West Bend, Cathy (Scott) Stevens of Marshalltown, Linda (Joel) Zwiefel of Fenton, Maurine Montag(Michael Jacobson) of Lake Park, and Bill (Lori) Montag of Coralville; Grandchildren Robert(Val) Lauck, Andrew Lauck, James(Sarah) Montag, Jeffrey(LaRae) Montag, Nicole(Taylor) Stockdale, Allison(Jordan) Den Hartog, Janelle(Jesse) DeGeest, Jacquelyn(Joshua) Thompson, Nicole(Drew) Schmidt, Alissa(Stoney) Wagner, Mallory Zwiefel, Ashley Voege, Joe Hippleheuser, Shawn Jacobson, Jason Jacobson, Blair(Jacob) Bartlett, Kelby Montag and Keegan Montag; 28 great-grandchildren; sister Maxine Laubenthal of West Bend and several nieces and nephews. Marvin was preceded in death by his parents Al and Agnes, wife Allie, daughter Mary Montag Harper, brother Mark Montag and his wife Laura, brother-in-law Marvin Laubenthal, brother-in-law Wesley Crowder and wife Aline; brother-in-law Billy Crowder and wife Mary Lynn, and niece Ellen Crowder. Marvin was a member of Sts. Peter and Paul’s Catholic Church, Knights of Columbus, the American Legion, and the West Bend Chamber. He was a driver for West Bend Ambulance Service.

The family of Marvin Joseph Montag created this Life Tributes page to make it easy to share your memories.