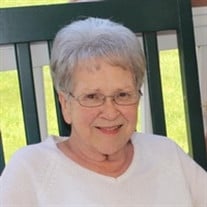 MARY LAVON FORD               Mary Ford, age 77, of Pocahontas, passed away on May 29, 2018. Services will be 10:30 a.m. Saturday, June 2 at First Lutheran Church in Gilmore City. Visitation is 5:00-7:00 p.m. on Friday at Harris Funeral Home in Gilmore City.             Mary Jacobson was born on July 17, 1940 in Portland, Oregon. The family then moved back to Iowa in 1942 and lived in Rolfe and Rutland, before settling in Gilmore City where she attended grade school and high school.             Mary and Gary Naeve were united in marriage in 1957 and to this union were born Janell and Russ. The couple lived and farmed in the Bradgate area until their divorce. Mary and her children then moved to Pocahontas.             There, she eventually began dating former schoolmate, Jim Ford, and they were married in 1967. The family grew to seven when Jackie, Tom and Mike were born. The Jim Ford family moved to Mallard in 1974 where the five kids graduated from Mallard High School. Mary worked for a total of 31 combined years at; Pocahontas Manor, Pocahontas Residential and West Bend Care Center. Her many patients enjoyed her compassion and her special way of making the day enjoyable! She was blessed with 12 grandchildren and 2 grandchildren. Her family was the center of her life and were her pride and joy. She loved being there to cheer on her grandchildren in sporting events, activities and other milestones. Some of her favorite things were: playing Squeal and other card games, Yatzee with her family, spending time with her neighbor, Kay Hoffert, going to her weekly hair appointments done by her dear friend, Vickie Kauffman, and watching Wheel of Fortune nightly while sipping her signature drink of Calverts and water. Mary use to “tool” around Gilmore City with her Mother, Sylvia and sisters, checking up on the neighborhoods while enjoying drinks and plenty of laughter. Mary had a special bond with each and every one of her children and grandchildren and will be missed dearly by all of her loved ones.             She was preceded in death by her parents Philip & Sylvia Jacobson, husband Jim Ford, brother Russell Jacobson, sister Joann Schurr and brothers-in-law Ben Schurr and Jack Wiese. Mary is survived by her five children; Janell Rittgers and her husband, Dave of Rolfe, Russell Naeve and his wife, Angela of Gilmore City, Jackie Roberts and her husband, Tim of Urbandale, Tom Ford and his wife, Jennie of Bradgate, and Mike Ford of Spanaway, Washington. She is also survived by sisters; Judy (Eugene) Carman of Cresco, Sheila Wiese of Mason City, Linda (Don) Tool Gilmore City and Sue (Ron) Anderson of Gilmore City.

The family of Mary L Ford created this Life Tributes page to make it easy to share your memories.

Send flowers to the Ford family.