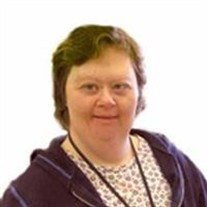 Clear Lake...Mary Jane Montag, 55 of West Bend died Thursday, February 25, 2016 in Clear Lake, Iowa. Services will be held Monday, 10:30 AM at Sts. Peter and Paul's Catholic Church, West Bend with burial to follow in West Bend Cemetery. Visitation is from 4-6 PM Sunday at the church where a vigil service will be held at 5:30 PM. Harris Funeral Home, West Bend, is in charge of arrangements Mary Jane Montag was born December 1, 1960, the daughter of Emmet and Mary Jane (Sherrard) Montag in Emmetsburg, IA. Mary lived in West Bend with her parents until 1972. At that time, they moved to Forest City, IA where she continued to live with her parents until September of 1987. At this time, Mary opted to move to Clear Lake, IA, where she lived with her many friends and extended family at Opportunity Village in Oak Hill Cottage. Mary enjoyed many things about life. On top of her list was her many nieces & nephews. Mary enjoyed latch hooking, ceramics, ribbon dancing and many of the other activities offered at Opportunity Village. Mary was a sports fan and could often be heard in her room cheering on the Iowa Hawkeyes whether it was football or basketball. Mary, also, was an avid Minnesota Viking’s fan. Mary enjoyed going on outings with her many friends from Opportunity Village. They could be seen at the Clay County Fair, Iowa Cubs Baseball games or even at “The Surf Ballroom” dancing up a storm. One of Mary’s favorite groups at the “Surf” was the “White Sidewalls”. Mary will be greatly missed by her mom: Mary Jane Montag of West Bend; brothers and sisters: Susan (John) Fuchsen of Brighton, CO, Tim (Stella) Montag of Spring Hills, KS; Joe (Kathy) Montag of West Bend, IA, Pat Montag of Dallas, TX, Judy Montag of Forest City, IA, Phil (Karen) Montag of Forest City, IA. Also, left to cherish Mary’s memory are her many nieces, nephews, aunts, uncles and her extended family and friends from Opportunity Village. Mary was proceeded in death by her dad, Emmet Montag and many special aunts and uncles.

The family of Mary Jane Montag created this Life Tributes page to make it easy to share your memories.