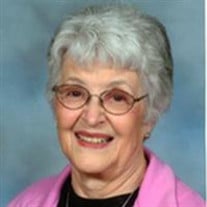 West Bend... Maxine Rosalia Knecht, the daughter of Nicholas and Anna Schmalen Bormann, was born September 22, 1925 near St. Joseph, Iowa, where she was raised and educated, graduating from the St. Joseph High School in 1943. In May of 1948, Maxine was united in marriage with Norbert Knecht in St. Joseph's Catholic Church, St. Joseph. The couple made their home in West Bend where they raised their four children. Maxine worked as a bookkeeper for the West Bend Elevator Company until her retirement in 1994. She was an active member of Sts. Peter and Paul's Catholic Church, having served in all offices of the Catholic Ladies Aid, as a Parish Director, and as a Sts. Peter and Paul's Catholic School Board member. Maxine also was a Hospice and Reach to Recovery volunteer. She was a past member of the West Bend Golf and Country Club Board of Directors. She joined friends on many bus trip vacations and enjoyed playing cards, golfing and spending time with her grandchildren. Survivors include her children Doug (Judy) Knecht of North Ridge, CA, Gayle (Ervin) Thilges of West Bend, IA, and Debbie Knecht of Algona, IA, son-in-law Mike Miller of Arnolds Park, IA, 11 grandchildren and 12 great grandchildren, siblings: Ralph (Gertrude) Bormann of Humboldt, IA, William (Lois) Bormann of West Bend, IA, Eleanor Thilges of Algona, IA, Kathleen "Kit" Thilges of Algona, IA, Virginia “Jeanie” (Merle) Laubenthal of Algona, IA, and sister-in-law Helen Bormann of Algona, IA. Maxine was preceded in death by her parents, husband, Norbert, daughter, Jackie Miller, sister and brother-in-law Lorena and Ed Frideres, brother, James Bormann, brother and sister-in-law, Alfred and Lucille Bormann and brothers-in-law Willie Thilges and Albert Thilges.

West Bend... Maxine Rosalia Knecht, the daughter of Nicholas and Anna Schmalen Bormann, was born September 22, 1925 near St. Joseph, Iowa, where she was raised and educated, graduating from the St. Joseph High School in 1943. In May of 1948,... View Obituary & Service Information

The family of Maxine Rosalia Knecht created this Life Tributes page to make it easy to share your memories.

Send flowers to the Knecht family.