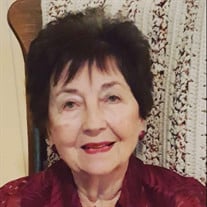 Memphis Kibbie, age 89 of Emmetsburg, passed away Wednesday, September 15, 2021 at her daughter’s home in Plattsburg, Missouri. Funeral services will be held on Wednesday at 10:00 AM at Holy Family Catholic Church in Emmetsburg. Burial will take place in Calvary Cemetery in Ayrshire. Memphis Rochelle Kibbie, the daughter of Cecil Quail and Madge (Monselle) Quail, was born on August 7, 1932 in Spencer, Iowa. She attended and graduated from Everly High School. On June 7, 1958 Memphis was united in marriage with Emmett Joseph Kibbie in Spencer, Iowa. The couple moved to the family farm south of Ayrshire. After they retired off the farm, they moved to Emmetsburg where they were members of Holy Family Catholic Church in Emmetsburg. Memphis had a great love for God which she passed on to her children. She enjoyed many of the simple things in life such as sitting by the lake and going for car rides. She also enjoyed gardening, dancing, and music, especially Elvis. Her greatest joy was her grandchildren and great-grandchildren and making them her special buttered noodles. Left to cherish Memphis’s memory are her children, Joseph Kibbie of Laurens, Rochelle (Mike Reynolds) Mitchell of Plattsburg, Missouri, and Scott (Kim) Kibbie of Emmetsburg; 7 grandchildren, Jacob, Dylan, and Grant Kibbie, Ashley (Bill) Lyons, Tyler (Allison) Mitchell, Caleb Mitchell, and Jaqueline Heath; 5 great grandchildren, Lane and Luke Lyons, and Holly, Hudson, and Hailey Mitchell; and siblings, Jackie Wyman of Spencer and Terry Schroeder of Tempe, Arizona. She was preceded in death by her parents, Cecil and Madge Quail; stepfather, Walt Schroeder; husband, Emmett Kibbie; and sister, Donna Rae Phillips.

Memphis Kibbie, age 89 of Emmetsburg, passed away Wednesday, September 15, 2021 at her daughter&#8217;s home in Plattsburg, Missouri. Funeral services will be held on Wednesday at 10:00 AM at Holy Family Catholic Church in Emmetsburg. Burial... View Obituary & Service Information

The family of Memphis Kibbie created this Life Tributes page to make it easy to share your memories.

Send flowers to the Kibbie family.