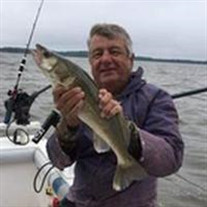 Michael P Dailey, age 59 of Gilmore City, Iowa died Wednesday, February 15th, 2017 in his home. Services will be held Monday, February 20, 11:00 AM at St. Mary's Catholic Church, Humboldt. Visitation will be from 2-5 PM Sunday at the Harris Funeral Home in Gilmore City where a vigil service will be held at 4:45 PM Mike was born July 21, 1957 in Perry, Iowa. He attended grade school at Saint John’s Catholic School before graduating from Gilmore City-Bradgate High School in 1976 as a proud Rocket. Known by most as ‘Slick’, Mike worked at Pro Coop for 30 years as a truck driver. He was employed more recently at Martin Marietta where he had been since 2011. On October 14, 1978, Mike was married to Carol L Swartz. Two children, Paul and Jill, blessed their marriage. Mike served as a local councilman for 16 years and was a volunteer firefighter for many years. He had many hobbies and interests. Mike loved traveling. He especially enjoyed trips to Phoenix, Jamaica, Texas for NASCAR races, and Minnesota for fishing. He spent many summers in Okoboji where he had a cabin and enjoyed boating, fishing and being with friends and family. Mike was an avid gun collector. He also took an interest in coin collecting and old Western films. Above all, Mike loved his family and friends and treasured the time he spent with them. He will be missed every day. Left to cherish his memory are son, Paul (Trudy) Dailey of West Des Moines, Iowa; his grandsons, Lucas and Zachary Dailey of West Des Moines, Iowa; his parents, Richard and Margaret Dailey of Gilmore City, Iowa; his siblings: Tony (Anne) Dailey of Fort Dodge, Iowa; Cindy Halverson of Des Moines, Iowa; and Rosemary (Mike) Davis of Spirit Lake, Iowa; as well as many other relatives and a host of friends. Mike was preceded in death by his grandparents, Glenn and Pauline Dailey; and his daughter, Jill Dailey. It is important to the Dailey family that friends are encouraged to give a donation to a charity in lieu of flowers. Their preferred charity is The University of Iowa Stead Family Children's Hospital. https://donate.givetoiowa.org/s/1773/foundation/interior.aspx?sid=1773&gid=2&pgid=495&cid=1222

The family of Mike Dailey created this Life Tributes page to make it easy to share your memories.

Send flowers to the Dailey family.