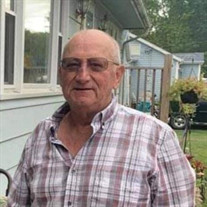 Mike Knowles, age 72 of Humboldt, passed away on Wednesday, September 15, 2021 at the Humboldt Community Hospital in Humboldt. Funeral Services will be held on Friday, September 24, 2021 at 10:30 AM at Our Saviour's Lutheran Church in Humboldt. Masks are required for the service and the service will be live streamed on the Our Saviour's Lutheran Church's Facebook page https://www.facebook.com/oslhumboldt. Burial will take place at Hardy Trinity Lutheran Cemetery in Hardy. Visitation will be held on Thursday, September 23, 2021 from 4:00 PM until 7:00 PM at Our Saviour's Lutheran Church in Humboldt with a 7:00 PM Prayer Service. Masks are suggested for the visitation. Michael was born on June 11, 1949 in Fort Dodge, the son of Carol and Flora (Summers) Knowles. Mike grew up in Humboldt, Iowa and attended Humboldt schools until his junior year of high school, when he left to join the workforce. He was united in marriage to the love of his life, Kathy (Brockman) on July 5, 1984 in Hartville, Missouri. Mike was the proud father of four children: James (Al), Mary, Michelle, and Nicholas. Mike pursued his GED and received his degree from Iowa Central Community College in 2004. Mike worked various industry jobs as well as for the City of Humboldt until he retired on September 30, 2011. Mike enjoyed working on various projects and spending time with his family, especially his grandchildren, who were his pride and joy. Mike is survived by his wife, Kathy, his children Al (Nicki) Knowles of Sioux City, Mary (Cory) Eastman of Rolfe, Michelle Knowles (Robert Kollasch) of Whittemore, and Nicholas Knowles (Jami Olson) of Dakota City; sisters Vicky Welter of Bode and Paula (Jerry) Dahl of Rutland, and brother Dennis (Bessie Carter) of Oklahoma City, OK; and grandchildren Maxwell, Harrison and Elliot Knowles, Tayla, Jade and Shayna Lange, Macy, Gracelyn and Kinley Eastman, and Liam and soon to arrive Owen Kollasch. Mike was proceeded in death by his parents, brothers John and Timothy, and grandchildren Isaac and Noah Kollasch and Brittany Knowles.

Mike Knowles, age 72 of Humboldt, passed away on Wednesday, September 15, 2021 at the Humboldt Community Hospital in Humboldt. Funeral Services will be held on Friday, September 24, 2021 at 10:30 AM at Our Saviour's Lutheran Church in Humboldt.... View Obituary & Service Information

The family of Mike Knowles created this Life Tributes page to make it easy to share your memories.

Mike Knowles, age 72 of Humboldt, passed away on Wednesday, September...

Send flowers to the Knowles family.