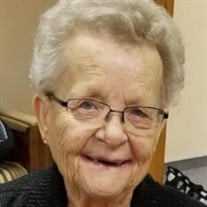 Minnie Jean (Winter) Walker, age 90, of Algona died, surrounded by her family, on Saturday, August 21, 2021, at Kossuth Regional Health Center in Algona. Visitation will be 5 – 7 PM Monday at First Presbyterian Church in Algona. Funeral services will be at 10:30 AM Tuesday, August 24, at First Presbyterian Church with burial to follow at Riverview Cemetery in Algona. Minnie J. Winter, the daughter of Ubbe and Hermena (Sleper) Winter, was born on February 4, 1931, in Lincoln Township, Winnebago County, Iowa. She was baptized and confirmed at the First Reformed Church in Buffalo Center, Iowa. She graduated from Buffalo Center High School in 1949. On February 23, 1951, Minnie was united in marriage to Merlin Eugene Walker at First Reformed Church in Buffalo Center. After their marriage, Minnie became a member of Good Hope Methodist Church in rural Lone Rock. She was very active in the UMW, serving in various roles throughout the years. She was the Sunday school superintendent for several years. When the Good Hope church closed, Minnie and Merlin became members of First Presbyterian Church in Algona. Minnie was a dedicated farm wife, helping Merlin on the farm until they moved to town in 2007. 4-H was important to Minnie as she served as a 4-H leader. She was awarded an Honorary 4-H Member Award in 1985. Also, Minnie was the 4-H superintendent of the Expressive Arts Department at the Kossuth County Fair for many years. In 2001 she was honored by the Kossuth County Fair Board as a “Longtime Volunteer and Supporter” of the fair. Minnie was an active member of the American Legion Auxiliary. Some of her hobbies included reading, crocheting, playing cards, and watching TV. Minnie especially enjoyed attending her grandchildren’s activities. Left to cherish Minnie’s memory are her children and grandchildren: Jean (Bob) Kent of Algona and their children Aaron (Lindsey) Kent, Shelby Kent (fiance` Richelle Benjamin), and Becca (Andrew) Johnson; Judy (Tim) Samp of Algona and child Nate Samp (fiance` Nicole Fusco); Doug (Jeanette) Walker of Algona and their children Jeremy (Kayla) Walker, Paul (Ashley) Walker, Alyssa (Heri) Rakotoarivelo, and Kyle (Heather) Walker; and Don (Denise) Walker of Algona and their children Darla (Tony) Virelli, Danielle (Dan) Ries, Debra (Everett) Scott, and Darcy (Logan) Wood; 21 great grandchildren; sister Marge Miller of Des Moines; and sisters-in-law Evelyn Winter, Carmen Winter, and Bernice Walker. She was preceded in death by her husband Merlin in 2017; her parents; brothers John, Edward, Andrew, George, Lawrence, and four siblings in infancy.

The family of Minnie Walker created this Life Tributes page to make it easy to share your memories.

Send flowers to the Walker family.