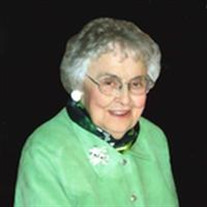 Monica Josephine Schany (Mahan), age 93, of Green Bay passed away peacefully on Wednesday, August 30, 2017. Monica was born in a farmhouse in Mallard, Iowa on March 19, 1924 to the late Miles and Bessie (Forey) Mahan. She attended school near... View Obituary & Service Information

The family of Monica Schany created this Life Tributes page to make it easy to share your memories.

Send flowers to the Schany family.