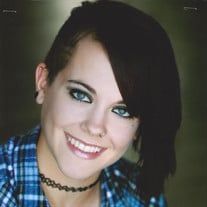 Nicole Bosworth, age 29 of Des Moines and formerly of Algona, passed away suddenly on Thursday, May 6, 2021, at her home. Mass of Christian Burial will be held on Thursday, May 13, at 11:00 a.m. at St. Cecelia Catholic Church in Algona, with masks required. Services will be livestreamed on the Five Saints Catholic Community YouTube page found at www.youtube.com/user/stceceliaalgona. A luncheon will follow in the St. Cecelia Parish Center. Visitation will be held on Wednesday, May 12, from 4:00 - 7:00 p.m. at Lentz Funeral Home in Algona, with a scripture service at 7 p.m. Nicole Lynn Bosworth, the daughter of James Bosworth and Lisette (Hood) Wiltse, was born on January 2, 1992, in Algona. Throughout her school years, Nicole was active in athletics, theater, and music, playing multiple instruments. She loved to be on stage, to entertain others, and to make people laugh. Nicole graduated from Algona High School in 2010. She then graduated from DMACC in 2011 with an associate degree in photography and moved to Los Angeles on her own at the age of 20. Nicole was hired as an actor in many different roles covering network television, movies, and band promotions, and she also worked as a waitress and barista. She was courageous enough to give stand-up comedy a try on a few occasions. Additionally, she obtained a fitness degree from the Southern California Health Institute in 2016, was a bodybuilder, and worked as a personal trainer. She was a fitness enthusiast and dedicated many hours to the gym; in 2017, she competed in the National Physique Committee (NPC) California State Championships. Before returning to Iowa recently, Nicole moved briefly to the Seattle, Washington, area in 2020. Nicole enjoyed biking, camping, hiking, drawing, music, hanging out with her friends, and joking around. She was not a stranger to karaoke. She also enjoyed traveling abroad and spending time with her two dogs, Carmel and Doby. Nicole had a zest for life, an adventurous spirit, and a colorful and fun personality. She was very social and seemed to have an easy time developing meaningful friendships. She was dependably genuine and open with her thoughts and feelings. She made every occasion more memorable and left her vibrant mark everywhere she went. She will be missed dearly by many. Left to cherish Nicole’s memory are her mother, Lisette (Cory) Wiltse of Algona; father, Jim Bosworth of Algona; sisters, Katy (Tim) Hawkins and their daughter Emery of Nashville, TN, and Samantha Hood of Philadelphia, PA; grandparents Elaine Hood of Algona and Ruth and Harold Bosworth of Algona; and many aunts, uncles, and cousins. She was preceded in death by her grandfather, John Hood, in March. Lentz Funeral Home of Algona is serving the family. Condolences may be left at www.lentzfuneralhome.com.

Nicole Bosworth, age 29 of Des Moines and formerly of Algona, passed away suddenly on Thursday, May 6, 2021, at her home. Mass of Christian Burial will be held on Thursday, May 13, at 11:00 a.m. at St. Cecelia Catholic Church in Algona,... View Obituary & Service Information

The family of Nicole Bosworth created this Life Tributes page to make it easy to share your memories.

Nicole Bosworth, age 29 of Des Moines and formerly of Algona,...

Send flowers to the Bosworth family.