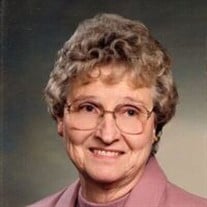 Click here to view/print Funeral folder West Bend... Norma Jean (Foutch) Bonnstetter, the daughter of Theodore and Nora (Grate) Foutch was born January 16, 1931 in Council Bluffs, IA.  She was raised and educated in Council Bluffs.  Norma moved to West Bend, IA, and completed her Junior and Senior year at West Bend Community High School, graduating in 1949.   She was united in marriage with Leroy Bonnstetter on September 20, 1949 at Sts. Peter and Paul's Catholic Church in West Bend.  The couple lived and farmed near West Bend their entire married lives, moving to town in 1981.  Norma loved farm life and being a homemaker.  She loved taking care of her family, cleaning and gardening.  Norma’s door was always open to family and friends and her cookie jar was always full.  She would co-pilot on airplane rides with Leroy to go see her family.  Norma missed the farm life when they moved to town, but she remained dedicated to her “career” of being a homemaker and helping others.  After her husband's death in 1997, Norma would frequently be seen doing various "tidying up" chores at the church in the early hours of the morning before daily Mass.  She had been a resident of the West Bend Care Center the past 12 years, where her homemaker skills continued.  When she was able, she could be seen folding napkins and laundry, while always trying to help others.   Norma was called “home to heaven” a day before her 90th birthday. Norma was a member of Sts. Peter and Paul's Catholic Church and the Ladies Aid of the church.    Her survivors include her children, Linda (Gary) Peterson of Whittemore, IA, Jim (Angie) Bonnstetter of West Bend, IA , grandchildren: Casey (Christy) Peterson of Algona, IA, Andy (Tory Wunder) Peterson of Longmont, CO, Megan (fiance Dustin Patrick) Mortensen of Waverly, IA, and  Nolan Bonnstetter of Cabo San Lucas, Mexico; great  grandchildren, Molly and Jenna Peterson and  Finlay and Franki Mortensen; brother Jerry Foutch and sister Peggy Moore.  She was preceded in death by her parents, husband Leroy, sisters Evelyn and Donna, as well as brothers Ted and Gale.

The family of Norma Jean Bonnstetter created this Life Tributes page to make it easy to share your memories.

Send flowers to the Bonnstetter family.