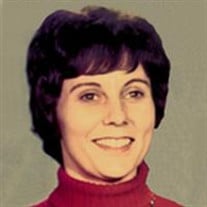 Service for Norma Woodford,79, of Mallard will be 10 am Monday at the United Methodist Church in Mallard, Iowa. Burial will be in the Rush Lake Cemetery in Curlew, Iowa. Visitation is from 9-10 am Monday at the United Methodist Church in Mallard. Norma Jean Fisher, daughter of Frank and Leona (Layton) Fisher, was born April 11, 1937 in Emmetsburg, Iowa. Norma attended school in Mallard, graduating from Mallard High School in 1955. Norma married John Alan Woodford on June 19, 1955 at the United Methodist Church in Mallard. The couple farmed together near Mallard their entire married lives. Norma was a member of the Order of the Northern Star and the United Methodist Women. She also taught Sunday school and was a leader of MYF. She cherished the time spent with her family and friends and enjoyed golfing and mowing. Norma passed away at Palo Alto County Hospital in Emmetsburg on Thursday, September 8, 2016 at the age of 79 years. Survivors include her husband, Alan Woodford of Mallard; children, Debra (Duane) Myer of Curlew and Ken (Dawn) Woodford of Mallard; grandchildren, John (Crystal) Woodford and their children Asher and Archer of Mallard, Lisa Woodford of Mallard, Cole Woodford of Des Moines, Elizabeth (John) Bohhen of Colorado Springs, CO, Michael (Nicole) Myer and their children Morgan, Wyatt and Tate of Curlew; and brother, John Fisher of Sioux Falls, SD. Norma was preceded in death by her parents; sons, Steven and Michael Woodford; brother, Francis Fisher and sister, Marlene Murphy.

The family of Norma J. Woodford created this Life Tributes page to make it easy to share your memories.

Service for Norma Woodford,79, of Mallard will be 10 am Monday...

Send flowers to the Woodford family.