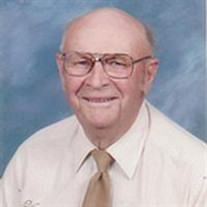 Norman Struecker was born August 21, 1926, to William and Emma (Kroger) Struecker. Norman was schooled in Whitemore, Iowa and served in the United States Navy from 1944 to 1946. Following his discharge, Norman farmed for 50 years. He enjoyed... View Obituary & Service Information

The family of Norman Struecker created this Life Tributes page to make it easy to share your memories.

Send flowers to the Struecker family.