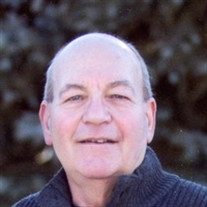 Click here to view/print Funeral Folder Mallard...Onnie Lee Akridge, 65 was born May 12, 1953 in Emmetsburg, Iowa, one of twelve children born to Virgil (Jack) and Josephine (Weir) Akridge.  He received his education in Emmetsburg and Mallard, graduating from the Mallard High School in 1972, where he participated in wrestling and football. Onnie and Joan (Russell) were married December 22, 1972 and were the parents of Tony, Trinity, Tracey and Tim.  He worked for many years in construction and masonry as well as spending time welding in several factories in the area.  Onnie was proud of the fact that at the age of 57 he returned to school and earned an AAS Degree in Electrical Technologies.  Survivors include his wife Joan of Mallard, IA, and children, Tony(Tami) Akridge of Albia, IA, Trinity (Andy Soenen) Akridge of Emmetsburg, Ia, Tracey (Kevin) Duus of Graettinger,IA and Tim Akridge of Sioux Falls, SD, grandchildren:  Marcus, Kailey, Taylor, Treyton, Alexis, Jackson, Taryn, Alana, Linkin and Atyliese, great grandson Chip and his beloved comfort Grand Dog Harley, siblings:  Betty (Jerry) Knight, Sharon (Frank) Leuer, Roger (Sandy) Akridge, Mary (Ray) Carritt, Larry (Janet) Akridge, Debbie (Reg) Cross, Mike, Belinda and Ron, brothers in law:  Dick (Ellie) Russell, Tom(Boua) Russell, sisters in law:  Mary (John) Holloway, Jean (Dan) Green, Marilyn Akridge and Anne Russell.  Onnie loved hunting, fishing and anything to do with the outdoors.  He loved nothing more than sitting around a campfire shooting the breeze while enjoying a cold one.  He especially loved growing his garden and canning the harvest.  He was most proud of his grandchildren and attending their activities.  He loved teasing them and trying to make them believe in things that they knew couldn't possibly be.  He always said if there was anything he did right in his life, it was his family. Onnie died Thursday, February 7, 2019 at the Palo Alto County Hospital in Emmetsburg. He was preceded in death by his parents, sister Nancy and brother Jack as well as his in laws Woody and Ruth Russell and brother in law Bob Russell.  The public may pay their respects from 2-4 PM Saturday February 16, 2019 at the Harris Funeral Home in Mallard, IA (405 S. 6th Street).  A time to share stories will begin at 3:00 PM.  Friends are invited to a luncheon immediately after visitation at the P.C. Harris Hall, directly south of the funeral home in Mallard. The family insists that you dress casual.  www.harrisfuneralservices.com

Click here to view/print Funeral Folder Mallard...Onnie Lee Akridge, 65 was born May 12, 1953 in Emmetsburg, Iowa, one of twelve children born to Virgil (Jack) and Josephine (Weir) Akridge.  He received his education in Emmetsburg and Mallard,... View Obituary & Service Information

The family of Onnie Lee Akridge created this Life Tributes page to make it easy to share your memories.

Send flowers to the Akridge family.