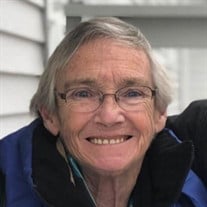 Memorial Gathering will take place on Saturday May 1st from 1 - 3 PM at the Lone Rock American Legion Hall in Lone Rock. Patricia Hantelman, age 70, of Algona passed away on December 20, 2020 at her home. Patricia Mary “Pat” Hantelman was born on November 26th, 1950 and adopted by David and Irene Lynch of Lone Rock, Iowa. As her father, David, was a well-known quarter horse rancher in the area, Pat was often found showing horses and competing in barrel racing as a youth and teenager. In the summer of 1969, Pat met Allen Wayne Hantelman, just home from Vietnam, and began dating and were married in August. Stacy and Chad were born shortly thereafter, and they all lived on Allen’s farm west of Fenton, Iowa until 1990 when Allen and Pat divorced. Pat has lived in Algona Iowa with her partner, Pete, and worked at several long-standing jobs at Chantland’s in Humbolt, IA, The Kossuth County Hospital, and Aluma in Bancroft, IA. Pat is remembered as a free spirit. She loved to travel. She traveled to Busan, South Korea twice, once to attend her son Stacy’s marriage and upon the birth of Mackenzie. She took innumerable motorcycle trips all over the United States. She loved to travel to Glacier National Park in Montana and attend local Iowa blues festivals with Pete. On many occasions they would travel to her Son Chad’s acreage in rural Seabeck, WA. At one point, Pat even rode her own Harley Davidson motorcycle. This led her to be affectionately known among the family as the Harley Grandma! In 2017, Pat was diagnosed with Chronic obstructive pulmonary disease (COPD). This led to a deteriorating health condition that eventually took her life on December 20th, 2020. Pete and Pat had taken great care to shield herself from contracting COVID-19 for the months since the outbreak of the pandemic, but succumbed to her health condition, nonetheless. Pat is survived by her partner, Donald “Pete” Peterson: Partner; sons, Stacy Allen Hantelman and his wife Young Sook of Round Rock, TX and Chad Michael Hantelman and his wife Jennifer of Seabeck, WA; grandchildren, Mackenzie, Gavin, Dylan and Elise; and a brother, David Lynch Jr. of Lone Rock.

Memorial Gathering will take place on Saturday May 1st from 1 - 3 PM at the Lone Rock American Legion Hall in Lone Rock. Patricia Hantelman, age 70, of Algona passed away on December 20, 2020 at her home. Patricia Mary &#8220;Pat&#8221;... View Obituary & Service Information

The family of Patricia Hantelman created this Life Tributes page to make it easy to share your memories.

Memorial Gathering will take place on Saturday May 1st from 1...

Send flowers to the Hantelman family.