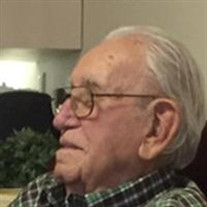 Mallard...Paul Bierie, 90 of Mallard, died April 27, 2017 at the Anamosa Care Center, Anamosa, IA. Services will be held Friday June 9, 11:00 AM at Rush Lake Cemetery, Mallard, with graveside rites by the American Legion Post of Mallard. Harris Funeral Home of Mallard is assisting the family. Paul Oscar Bierie, the son of Harold and Ida (Buenzow) Bierie was born July 14, 1926 in Sumner, Iowa. After his parents were killed at an early age he was raised by his aunt, Anna Bailey, who was appointed guardian. He was raised by dear friends, Louie and Anna Everding. Paul graduated from Waverly High School in 1944. In February of 1944 he enlisted in the US Navy. He was assigned to the staff of Vice Admiral Marc S. Mitscher aboard the USS Bunker Hill; a ship that was hit by 2 bombs and 2 suicide planes on May 11, 1945 where half of the staff perished. He was discharged in 1946. On December 14, 1946 he was united in marriage with Eloise "Sally" Leadley in Sioux City, IA. Paul was recalled for the Korean War, serving from 1950-1952. Sally and Paul lived in Mallard the majority of their married lives where he owned and operated Larson and Bierie Oil with Ted Larson. He also contracted as a Star Route Carrier until his retirement. He was a proud and lifetime fireman, American Legion Member as well as a Mason. Survivors include his sister Maxine Benzine of Cedar Rapids, IA, foster sister Lucille Downing of Shell Rock, IA, brother-in-law Ted (Norman Jean) Larson of Mallard, IA, sister-in-law Anne Larson of Buffalo Center, IA, and nieces and nephews. www.harrisfuneralservices.com

The family of Paul Bierie created this Life Tributes page to make it easy to share your memories.

Send flowers to the Bierie family.