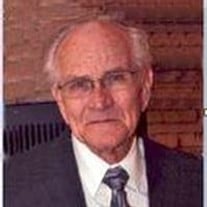 Paul Garbarino, 84 of West Bend died Friday May 3, 2013 at the Paula J. Baber Hospice Home, Fort Dodge. Services will be held Thursday, 10:30 AM at Peace Lutheran Church West Bend with burial in the West Bend Cemetery. Visitation is from 4-7 PM Wednesday at the church. Harris Funeral Home of West Bend is in charge of arrangements. Paul Raymond Garbarino was born on September 19, 1928 in Phoenix, Arizona to Harold and Eva Garbarino. He graduated from Phoenix Union High School in 1947, and then moved to Chicago, IL to work at Strowger Automatic Electric (later became GTE) as a telephone office installer. In 1950, Paul was sent to Mattoon, IL to install central office dial telephone equipment. There, he met and fell in love with Anna Mae Leathers. They were married on September 23, 1950 in Charleston, IL. The newly married couple traveled throughout the US, living in a trailer while Paul installed telephone systems. During this time, two sons (Steven and Scott) were born. The family's first home was in Fort Wayne, IN where they welcomed a daughter (Paula) named after her dad and a third son (Michael). The family moved to Illinois, and a fourth son (John) was added. In 1960, Paul and Anna became active members of the Grace Lutheran Church in Streamwood, IL. Paul was a trustee and elder and served God faithfully in the work of the church. In Illinois, Paul also greatly enjoyed building his own home and working outside in the lawn. Paul was a man of exceptional work-ethic and dedication. He retired from GTE after 35 years of faithful service, eventually working into the lab as a design engineer. Following his first retirement, he began to work for Cardinal Health until 77 years of age as a deliverer of radio-active medicine in the Chicagoland area. In 2005, Paul and Anna moved to West Bend, IA. There, Paul enjoyed a morning paper route where he could visit with people daily. Paul and Anna became members of Peace Lutheran Church in West Bend, and Paul faithfully kept the candelabras filled for worship services. As a committed husband and father, Paul lived out his love for his family to the best of his ability. His greatest joy was being around his children and grandchildren. Paul was known for his consistent smile, countless cups of coffee, and his love for people. Survivors include his wife, Anna, their children, Steven (Diane) of Owings Mills, MD; Scott (Marilyn) of Kenosha, WI; Paula (John) Schmidt of West Bend, IA; Michael (Susan) of Lake of the Hills, IL; and John (Denise) of St. Charles, IL; his ten grandchildren, and thirteen great-grandchildren. Paul was preceded in death by his parents and two sisters.

Paul Garbarino, 84 of West Bend died Friday May 3, 2013 at the Paula J. Baber Hospice Home, Fort Dodge. Services will be held Thursday, 10:30 AM at Peace Lutheran Church West Bend with burial in the West Bend Cemetery. Visitation is from 4-7... View Obituary & Service Information

The family of Paul Garbarino created this Life Tributes page to make it easy to share your memories.

Send flowers to the Garbarino family.