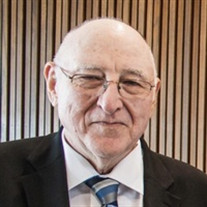 Paul Martin Lauck, 79, of West Bend, IA passed away on Sunday, December 2, 2018 at the Hospice of North Iowa in Mason City following a brief battle with cancer.   Paul was born on February 27, 1939 in Whittemore, IA to Ella (Meyer) and Henry Lauck, Sr.  He graduated in 1957 from Whittemore High School.  Paul married Janice Balgeman on November 17, 1963.  The couple lived in rural Whittemore until moving to rural West Bend in 1967 where they raised their three children; Julie, Tim, and Todd.  They moved to a house in West Bend in 1989 where he resided until his death.    Paul worked at Roeber Construction for five years after high school graduation before becoming a hog buyer for J.B. Mertz & Son.  He worked as a hog buyer in West Bend until his retirement in 2004.    Paul was a true believer in service to the West Bend Community.  He served on the West Bend School Board, West Bend City Council, West Bend-Mallard Achievement Foundation, and the Kossuth and Palo Alto County Economic Development Corporation Board.  He was a longtime member of Peace Lutheran Church serving in many leadership capacities including long-time church treasurer holding that role up until the time of his death.    Paul enjoyed golfing and was a member of the West Bend Golf & Country Club.  In his retirement, he kept busy reading and driving cars for West Bend Ford.  He was an avid sports fan including supporting his children and grandchildren’s activities.  He also followed his son Tim’s basketball teams at Dallas Center-Grimes and was named the Fan of the Game at the Iowa High School Boys State Basketball Tournament in 2016.  He was a life-long Chicago Cubs fan with the crowning moment being their World Series win in 2016.   Paul is survived by Janice, his cherished wife of 55 years.  His three children:  Julie Coppock of Marion, IA; Tim Lauck of Grimes, IA; and Todd (Michele) Lauck of Spencer, IA.   Grandchildren Dain Coppock, Erin (Ben) Strellner, Kiley Coppock (Mason Vogel), Austin Lauck (Lindsey Suits) and Nicole Lauck (Chris Anderson).  Additional survivors include:  his sister Lucille (Dale) Mains; brothers Henry Lauck, Jr.; Ivan (Pat) Lauck; Larry (Deb) Lauck; Gary (Aline) Lauck; and brother and sister-in-law Jerry and Jayne Balgeman.  In addition, Paul leaves behind many treasured nieces, nephews, and friends.   Paul was proceeded in death by his parents Ella and Henry Lauck, Sr., parents-in-law Harry and Ernestine Balgeman, and sister-in-law Alyce Lauck.   Paul was a faithful servant of Jesus and looked forward to being with Him in Heaven along with many beloved family members and friends that passed before him.   Memorial gifts may be directed to the West Bend Achievement Foundation, West Bend Pool Fund, West Bend Fire Department, and West Bend Ambulance Service.

Paul Martin Lauck, 79, of West Bend, IA passed away on Sunday, December 2, 2018 at the Hospice of North Iowa in Mason City following a brief battle with cancer.   Paul was born on February 27, 1939 in Whittemore, IA to Ella (Meyer) and Henry... View Obituary & Service Information

The family of Paul Martin Lauck created this Life Tributes page to make it easy to share your memories.

Send flowers to the Lauck family.