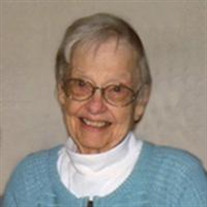 West Bend. Pearl J. Enokson, 91 of West Bend died April 17, 2017 at the Good Samaritan Center in Indianola, Iowa. Services will be held Friday, 11:00 AM, April 21, at Peace Lutheran Church West Bend. Visitation will be held one hour prior to services at the church. Burial will be in Union Cemetery, Ottosen. Pearl (Thorson) Enockson, the daughter of Thelacious and Mabel (Overboe) Thorson was born April 19, 1925 in Humboldt, IA. She was baptized and confirmed in the Lutheran Faith in New Hampton, IA. After her graduation from New Hampton high school in 1943, she worked at Salisbury Laboratories in Charles City, IA, as a secretary and later attended Luther College in Decorah, IA, where she obtained her teaching certificate. She taught lower elementary grade school in both Terrill, IA and Ottosen, IA. She was united in marriage to Virgil Enockson November 5, 1950 at First Lutheran Church in Humboldt, IA. The couple lived in Humboldt for a short time before moving to West Bend where they made their home. While in West Bend, Pearl was employed as high school secretary at the West Bend Public School for twenty-eight years. She was affectionately known as "Mrs. E" to all of the teachers and students. Pearl was a member of Peace Lutheran Church where she served as choir director and Sunday school teacher. She also served as a board member at the West Bend Public Library. Survivors include her daughter Meredith (James) Weinman of Indianola, IA, grand children Angela (Curt) Braden of Fort Worth TX, and Andrew (Irene) Weinman of Cedar Park, TX; great grand daughters Madeline and Macy Braden; and one sister, Lorraine (Mrs. Raymond) Krieger of Sprit Lake, IA. She was preceded in death by her parents and husband Virgil. www.harrisfuneralserives.com

West Bend. Pearl J. Enokson, 91 of West Bend died April 17, 2017 at the Good Samaritan Center in Indianola, Iowa. Services will be held Friday, 11:00 AM, April 21, at Peace Lutheran Church West Bend. Visitation will be held one hour prior to... View Obituary & Service Information

The family of Pearl J. Enockson created this Life Tributes page to make it easy to share your memories.

Send flowers to the Enockson family.