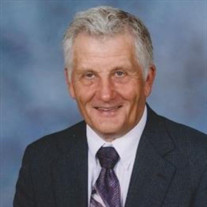 Ralph Charles Bormann, affectionately nicknamed “Dick” by his siblings, broke the bonds of this world and chains of suffering; entering his eternal resting place on Friday, November 19, 2021 with his family at his side. Mass of Christian Burial will take place Wednesday, November 24, 2021 at 10:30 AM at St. Mary's Catholic Church in Humboldt. Burial will take place at St. Joseph Catholic Cemetery in St. Joe with Military Honors conducted by the Livermore American Legion Otto-Field Post #415. Visitation will be held on Tuesday from 5:00 - 7:00 PM with a 6:30 PM Scriptural Wake Service at St. Mary's Catholic Church in Humboldt. Ralph “Dick” Bormann, 89, was born August 25, 1932 to Nick and Anna (Schmalen) Bormann in St. Joe, Iowa. He graduated from St. Joseph High School in 1950 and enlisted in the United States Army in December of 1952. He served in Korea during the Korean War and was honorably discharged in December of 1954. On June 3, 1957 Ralph was united in marriage to Gertrude McLaughlin in Belmond, Iowa. The couple raised their family on their farm southeast of St. Joe. Ralph was a livestock and grain farmer. He made a living raising hogs but cattle were his passion. He especially enjoyed the years he had cow/calf herds. Ralph retired from the farm in 2007 and he and Gertrude bought a home in Humboldt where they currently reside. Ralph was a member of the Livermore American Legion Otto-Field Post #415, St. Mary’s Catholic Church and St. Joseph’s Knights of Columbus. He was a humble man with a gentle soul and a faithful heart. Ralph will always be remembered as a hard worker who had a great sense of humor with witty one liners. He is a man who served his God, family and country. Ralph was so proud of his children, their strong Catholic faith, and his service to his country. He learned to cook and bake in the Army and enjoyed every opportunity to demonstrate his skills for his family; who absolutely loved his cinnamon rolls and sugar cookies. His famous beer battered chicken was served at many Legion dinners and enjoyed by all. Left to cherish Ralph’s memory are his wife of 64 years, Gertrude of Humboldt; children, Dwight Bormann (special friend Sherry Carlson) of Bode, Tim (Marilou) Bormann of Omaha, NE, Dan (Lynne) Bormann of Moville and Karen (Kyle) Ruhland of Sioux Falls, SD; ten grandchildren; 12 great grandchildren, with three more on the way; two sisters, Eleanor Thilges and Jeanie Laubenthal, and one brother, Bill Bormann. He was preceded in death by his daughter, Kathleen; his parents and five siblings.

Ralph Charles Bormann, affectionately nicknamed &#8220;Dick&#8221; by his siblings, broke the bonds of this world and chains of suffering; entering his eternal resting place on Friday, November 19, 2021 with his family at his side. Mass... View Obituary & Service Information

The family of Ralph "Dick" Bormann created this Life Tributes page to make it easy to share your memories.

Send flowers to the Bormann family.