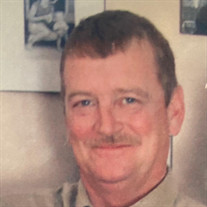 Randal Jergens, age 60 of Gilmore City, passed away Friday, May 21, 2021 in Humboldt. Celebration of Life services will be held on Saturday, June 5, 2021 at 2:10 PM at Randy and Jill's Home in Gilmore City. Visitation hours will be from 1:00 PM until 4:00 PM Saturday at Randy and Jill’s Home in Gilmore City. Lentz Funeral Home of Humboldt is assisting the family. www.lentzfuneralhome.com Randal “Randy” Scott Jergens, the son of Dick and Esther (Ghert) Jergens, was born on June 3, 1960 in Waterloo, Iowa. Randy attended Gilmore City Bradgate Schools and graduated in 1978. On January 22, 1982, Randy enlisted in the United States Marine Corp. and served until July 16, 1987. After his service, Randy was a former Gilmore City Police Officer and worked as a corrections officer for the Fort Dodge Prison. On July 23, 2008, Randy was united in marriage to Jill Louise Grause in Gilmore City, Iowa. The best part of his early life was his love and devotion to raising his daughter, Christina. Later in life he spent countless hours fishing and camping with his wife Jill and the family they created together, whom he loved to prepare meals for. In his spare time you could find him tinkering with cars and gardening. He loved going to auctions with his dad and blaming each other for their purchases. He also took great pride that he was in the Marine Corps following in his father's footsteps and sharing stories with everyone he encountered. Although Randy loved his hobbies his love for his family is all that mattered to him. His grandchildren brought him so much joy, he enjoyed spoiling them, playing with them and teaching them new things. Left to cherish Randy’s memory are his wife of 12 years, Jill of Gilmore City; his parents, Dick and Esther Jergens; children, Christina (John) Weydert of Gilmore City, Blaine (Katie) Telford of Peosta, Megan Telford (Jon Harle) of Gilmore City and Sarah (Brent) Swanson of Ames; 14 grandchildren; Siblings; Russ (Lori) Jergens of Mallard, Rich (Jenny) Jergens of Yakima, Washington and Shelley (Kyle) Jergens of Alta Vista, Arizona. Along with many loved nieces and nephews. He was preceded in death by his grandparents, Mike and Emma Ghert and Harvey R. and Earlene M. Jergens and a nephew, RJ Jergens. In lieu of flowers, a contribution may be directed to the family towards the Randal S. Jergens Memorial Fund.

Randal Jergens, age 60 of Gilmore City, passed away Friday, May 21, 2021 in Humboldt. Celebration of Life services will be held on Saturday, June 5, 2021 at 2:10 PM at Randy and Jill's Home in Gilmore City. Visitation hours will be from... View Obituary & Service Information

The family of Randal Jergens created this Life Tributes page to make it easy to share your memories.

Randal Jergens, age 60 of Gilmore City, passed away Friday, May...

Send flowers to the Jergens family.