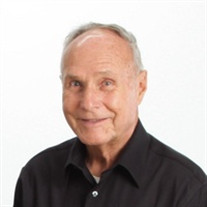 Raymond A. Reinders September 3rd, 1927 – February 21st, 2019 Raymond A. Reinders, 91 passed away peacefully February 21st, 2019 at the Josie Harper Hospice House in Omaha, Nebraska. Services will be held Tuesday February 26th 11AM at the United Methodist Church in Mallard, Iowa. Visitation will be from 9:30 – 10:30 at the church. Harris Funeral Home of Mallard is assisting the family.  Raymond was born September 3rd, 1927 in Mallard Iowa, to William and Marcia (Hahn) Reinders. He attended Mallard Community School, graduating in May, 1945. Upon graduation, he enlisted in the US Navy at the age of 17, serving 2 years on the Battleship USS Texas, stationed at Pearl Harbor and Midway Island. After being honorably discharged at the rank of Fireman 1st Class, he returned to Mallard, working as a mechanic for Ernst Garage, Mallard Community School taking care of the busses, and running his own repair business. On June 13th, 1959, he married Virginia Booth in Sioux City, Iowa. To this marriage, two children were born, Ann and John. When the opportunity to work for the US Postal Service as a Rural Mail Carrier arose, he jumped on it. He delivered mail to the rural areas of Mallard and Havelock, receiving the Postal Services Million Mile Award. He retired in 1990 after 33 years. After retiring, he continued his passion of collecting almost anything, but particularly antique hit and miss gas engines. In April 2008, he and Virginia had an auction and moved to Omaha to be closer to their family, which he truly enjoyed spending time with. He was active in many activities and organizations. He was a member of Multiple Iowa Masonic Lodges, York Rite Bodies, Eastern Star, Abu Bekr and Tangier Shrine, Mallard American Legion, and AMVETS. He served as the Chief of the Mallard Volunteer Fire Department for nearly 20 years. He was appointed by President Ronald Reagan to serve on the Selective Service Draft Board. He served as a Township Trustee, and was a member of the Mallard United Methodist Church and Countryside Community Church in Omaha. He had his private pilot’s license and enjoyed flying for many years. His most prized possession was his driver’s license. Raymond is survived by his wife of nearly 60 years, Virginia of Omaha, Nebraska, son John Reinders and wife Angela of Omaha, Nebraska, son-in-law Dan Biere of Eden Prairie, Minnesota, grandsons Nicholas Biere of Chicago, Illinois, Timothy Biere and wife Caitlin of Chicago, Illinois, Dillon Reinders of Omaha, Nebraska, sister Mary Olt of Dayton, Ohio, and sister-in-law Alice Reinders of Emmetsburg, Iowa. He was preceded in death by his mother and father William and Marcia Reinders, mother-in-law, Ruth Booth, brother Milo Reinders, brother-in-law Donald Olt, and daughter Ann (Reinders) Biere.

The family of Raymond A. Reinders created this Life Tributes page to make it easy to share your memories.

Send flowers to the Reinders family.