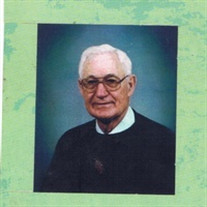 Raymond Louis Ernest Zinnel, 96 of West Bend, IA passed away peacefully early Saturday morning, August 18, 2018, at the West Bend Health and Rehab Center in the comfort of his family.Raymond was born on May 13, 1922, in West Bend to Henry and Agnes (Wichtendahl) Zinnel. He was baptized on June 4, 1922, at Peace Lutheran Church in West Bend. He was also confirmed there on August 16, 1936. As a child, he spent the majority of his time helping his father on the farm or attending church but enjoyed playing baseball and basketball in his spare time. After graduating from high school, he helped his father farm until he joined the Navy. During WWII, he served in the Navy Seabees, spending time in the South Pacific area.He was united in marriage to Lorma Blank on October 31, 1948, at Peace Lutheran Church. Together, they were blessed with five children; Ray Jr., Bob, Jan, Jon, and Jim. They farmed in the Whittemore area until 1987. During this time, Raymond also worked as a field assessor in Kossuth County for 20 years. After retiring, Raymond and Lorma joined Laborers for Christ, where they spent many years renovating churches and schools around the United States. Raymond took part in over 25 different projects including disaster relief for Hurricane Hugo. He worked on his last project in 2002 at the age of 80. In 1998, Raymond and Lorma moved to West Bend.Raymond was a devout Christian whose main passion was serving the Lord. He participated in various religious leadership roles throughout his life. He was involved in the rejuvenation of the A.A.L. (Thrivent Financial) in which he served as the Secretary and Treasurer for many years. He was a member of the LLL, where he served as the Secretary of Zone. He was an active school board member for St. Paul’s Lutheran Church. During this time, he coached the boys’ basketball team to a tournament championship. He frequently volunteered for the Orphan Grain Train. For many years, he taught Sunday School, served as a church elder, and sang in the church choir.Other involvements included the American Legion of Whittemore and West Bend, where he enjoyed attending Boy’s State in Des MoinesSome of Raymond’s favorite activities included singing, playing cards, telling jokes, discussing farming and the weather, and watching the Chicago Cubs, the Iowa Hawkeyes, and any other sporting event, especially his grandkids’. He was a beloved husband, father, and grandfather and will be missed by many.Survivors include his wife, Lorma of West Bend; five children: Ray Jr. (Nora) Zinnel, Bob (Connie) Zinnel, Jan (Mark) Gray, Jon (Beth) Zinnel, and Jim (Andrea) Zinnel; 17 grandchildren; 19 great-grandchildren; sister-in-law Gracka Herzberg; brother-in-law Fred (Laverne) Blank; and several nieces and nephews.Raymond was preceded in death by his parents; brothers: Arnold and Henry; sisters: Alvina, Esther, Elsie and Marcella; and several brothers-in-law and sisters-in-law. Services will be held Saturday, August 25, 2018, 11:00 AM at Peace Lutheran Church in West Bend with burial to follow in the West Bend Cemetery.  Visitation is from 4:30-6:30 Friday evening at the church.  Harris Funeral Home of West Bend is assisting the family.  www.harrisfuneralservices.com

Raymond Louis Ernest Zinnel, 96 of West Bend, IA passed away peacefully early Saturday morning, August 18, 2018, at the West Bend Health and Rehab Center in the comfort of his family.Raymond was born on May 13, 1922, in West Bend to Henry and... View Obituary & Service Information

The family of Raymond Zinnel created this Life Tributes page to make it easy to share your memories.

Send flowers to the Zinnel family.