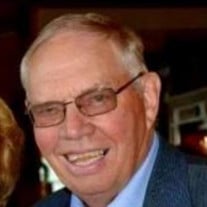 Dick Kuecker from Algona, Iowa died on Tuesday, June 8, 2021 at the Kossuth Regional Health Center in Algona at age 84 and passed on to his next life in heaven. He courageously fought Parkinson’s disease for over 15 years. Funeral services will be held on Friday, June 11, 2021 at 11:00 AM at Trinity Lutheran Church in Algona. Services will be live streamed on the Trinity Lutheran Church’s YouTube page https://youtu.be/Q2sN8QEPTS4. Burial will take place at Lott’s Creek Cemetery. Visitation will be held on Thursday, June 10, 2021 from 4:00 PM until 7:00 PM at Trinity Lutheran Church’s Life Center in Algona. Dick Kuecker was born June 20th in 1936 to Edward and Ida (Siems) Kuecker in Algona, Iowa. He was the second youngest of ten brothers and sisters. Dick married Beverly Gerber at Immanuel Lutheran Church Lotts Creek in 1957. During their sixty-three year marriage, Dick and Beverly were blessed with four children, twelve grandchildren, and nineteen great grandchildren. Faith, family, friends, and farming were Dick’s most important priorities. He was a lifelong farmer who started on his own right after high school graduation from Algona High in 1955. After a few years, he established Hawkeye Yorkshire Farm focusing on purebred Swine Seed stock. In 1998 he changed the name to Dick Kuecker & Son’s as he began his retirement at the early age of sixty. At this time, he turned over daily operations and responsibility of the farm to his boys but still stayed involved for the rest of his life. Dick and Beverly built their dream home on Spring Valley Golf Course where they enjoyed their retirement years playing golf, cards, and socializing with friends and family. In 2017 they moved to Van Buren Terrace independent living center. Dick earned many farming awards over the years due to his forward thinking approach in the pork industry. He was most proud of his FFA “Degree of America Farmer Award” (1957), Master Farmer Award (1979), State 4-H Alumni Recognition Award and Multiple National Type Conference Champions. Dick Kuecker was a devout man of faith who always put his trust in his Lord and Savior. He attended and was also very involved at Immanuel Lutheran Church Lotts Creek and Trinity Lutheran Church in Algona. Sharing and giving back to the community and pork industry was very important to Dick. He held many board and service positions including Algona District School board member and president. He stayed very active in his retirement years. He enjoyed playing golf, cards, and also watching many sports including his favorite team the Iowa State Cyclones. Dick’s greatest passion was attending his grandchildren’s sporting events and activities, especially hog shows. He was a proud grandfather. Survived by his wife Beverly Kuecker of Algona Iowa. His children: Randy & Theresa Kuecker (Whittemore, Iowa), Sheila & Dan Timm (St. Louis, Missouri), Keith & Sheila Kuecker (Algona, Iowa), Kim & Steve Renk (Winona, Minnesota). His siblings: Jerry & Genelle Kuecker (Cylinder, Iowa), and Jean Gerdis (Algona, Iowa).Proceeded in death by his parents and seven siblings; Delbert, Lois, Kenneth, Lucille Farr, Gertrude Balgeman, Kermit and Willis. Dick Kuecker will be remembered as a successful forward thinking farmer, a devote husband, a loving and proud father, and the “Best Grandpa Ever”!! We know he is enjoying his new forever home in heaven and reacquainting with a host of friends and family that proceeded him. Rest In Peace, we will miss you “Hawkeye”! Memorials may be sent to the family at, 520 S. Blackford Street, Apt 108, Algona, Iowa, 50511 and will be directed to organizations that were important to Dick and his family.

Dick Kuecker from Algona, Iowa died on Tuesday, June 8, 2021 at the Kossuth Regional Health Center in Algona at age 84 and passed on to his next life in heaven. He courageously fought Parkinson&#8217;s disease for over 15 years. Funeral... View Obituary & Service Information

The family of Richard "Dick" Kuecker created this Life Tributes page to make it easy to share your memories.

Send flowers to the Kuecker family.