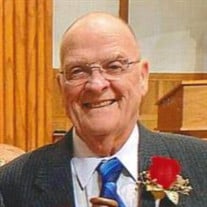 Richard “Dick” Reynolds, age 86, of Algona passed away on November 27, 2020 at his home surrounded by family. Private Family Mass of the Christian Burial will be 11:00 AM on Wednesday at St. Cecelia Catholic Church in Algona. Burial will take place in Calvary Cemetery. Visitation will be 4:00 – 6:00 PM Tuesday at Lentz Funeral Home in Algona with masks required and social distancing practices being followed. Mass will be livestreamed on the Five Saints Catholic Community YouTube page: www.youtube.com/user/stceceliaalgona. Richard Ervin Reynolds, the son of Lyle E. and Bernice (Kinsella) Reynolds, was born on December 22, 1933 in Greene, Iowa. He graduated from St. Cecelia Academy in 1952. On February 9, 1953 Dick was united in marriage with Jean (Winter) at St. Cecelia Catholic Church. Dick worked for 7 Up Company for 37 years and the Algona School System as a bus driver for over 20 years. He was a member of St. Cecelia where he had been an active member of funeral committees and he was an Honorary Life Member of the Knights of Columbus. Dick loved his family and enjoyed the Holidays, playing cards, Church Chapel, camping at Dawson’s Lakeside Campground and traveling to San Diego, CA. He was an avid coin collector and early in his life, he enjoyed coaching softball and bowling. Left to cherish Dick’s memory is his wife of 67 years, Jean; daughters, Linda (Ron) Monson of Lu Verne, Betty (Gary) Fiddler of Estherville and Sue (Craig) Hanson of Laurens; a daughter-in-law, Julie Reynolds of Algona; 9 grandchildren; 24 great grandchildren; a sister-in-law, Mary Reynolds of Peoria, AZ; and many nieces and nephews. He was preceded in death by his parents; a son, Steven Reynolds; and siblings, Jesse Reynolds, Margaret Seiler, Betty Dean, Leta Meyer, Dorothy Fuoss, Duane Reynolds, Phillis Hansen and Robert Reynolds.

Richard &#8220;Dick&#8221; Reynolds, age 86, of Algona passed away on November 27, 2020 at his home surrounded by family. Private Family Mass of the Christian Burial will be 11:00 AM on Wednesday at St. Cecelia Catholic Church in Algona.... View Obituary & Service Information

The family of Richard "Dick" Reynolds created this Life Tributes page to make it easy to share your memories.

Richard “Dick” Reynolds, age 86, of Algona passed away on November...

Send flowers to the Reynolds family.