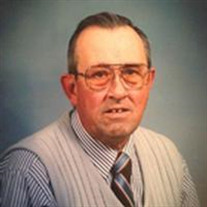 Richard Hanselman, 80 of West Bend died Monday March 16, 2015 at the Palo Alto County Hospital in Emmetsburg. Services will be held Friday March 20, 10:30 AM at Peace Lutheran Church, West Bend with burial to follow in the West Bend Cemetery. Visitation is from 4-7 PM Thursday at the church. Harris Funeral Home of West Bend is in charge of arrangements.   Richard Harvey Hanselman, the son of George and Grace (Buenger) Hanselman was born August 11, 1934 in Rodman, Iowa. He received his education in Rodman, graduating from Rodman High School in 1952. Richard served his country from 1957-1959 in the United States Army. On October 24, 1959 he was united in marriage with Mary Jane Jergens at the Peace Lutheran Church in West Bend. The couple lived and raised their family in West Bend where he worked at Calloway Lumber and then Lamperts Lumber Yard. He was then self employed as a carpenter and painter. Richard was very well known and respected for the work he did as caretaker of the West Bend Cemetery for many years. He spent many hours making sure the cemetery was well manicured.   Survivors include his wife Jane of West Bend, IA, children: Patricia (special friend Jon McCuskey) of Mason City, IA, Bruce (Nicole) Hanselman of Woodbury, MN, Barbara (Jeff) Schmidt of Geneva, IL and Karla (Mark) Schmidt of Eldridge, IA; grandchildren: Tristan and Heather Gahn, Rachelle, Mollie and Nick Hanselman, Jordyn, Madison and Alex Schmidt and Stephanie, Randy and Shelby Schmidt; brothers and sisters: LeAnn Meyer of Algona, IA, Donald Hanselman of West Bend, IA, Edith Glossen of Humboldt, IA and Eugene Hanselman of West Bend, IA. He was preceded in death by his parents and his sister Eldora Krug.   www.harrisfuneralservice.com

The family of Richard Hanselman created this Life Tributes page to make it easy to share your memories.

Send flowers to the Hanselman family.