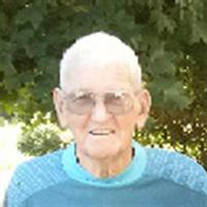 Click here to view/print Funeral folder Richard Kinseth, 88 of Ottosen died Wednesday, September 16, 2015 at Iowa Methodist Medical Center in Des Moines, IA. Services will be held Monday, September 21, 10:30 AM at Trinity Lutheran Church, Ottosen with burial to follow at Union Cemetery, Ottosen. Visitation is from 2-5 PM Sunday at the Harris Funeral Home in West Bend. Richard M Kinseth, the son of Mount Oliver and Olga (Floen) Kinseth was born November 5, 1926 in Ottosen, Iowa where he was raised and educated, graduating from the Ottosen High School in 1944. On November 27, 1944 he was united in marriage with Ramona Loos at First Lutheran Church in Gilmore City. The couple lived in Ottosen the majority of their married lives. Richard worked at the Ottosen Elevator for a short while and was a mail carrier in the Ottosen area for many years. Survivors include his wife Ramona of Ottosen, IA, children: Craig (Vicki) Kinseth of Overland Park, KS, Gary (Kay) Kinseth of Algona, IA, Marsha(Mike) Riordan of Oskaloosa, IA, Byron Kinseth of Flagler, CO, Karen,(Brett) Irving of Pittsfield, IL and Richard (Kathleen) Kinseth of Des Moines, IA; 9 grandchildren and 9 great grandchildren. Richard was a member of the Trinity Lutheran Church, worked mowing the Union Cemetery in Ottosen, and for many other people in Ottosen. He was in the Ottosen Card Club for over 50 years, the Rural Mail Carriers Association and coached American Legion Baseball. He also served as Mayor of the City of Ottosen for 48 years, the fourth longest serving mayor in the country. Richard was preceded in death by his parents, sisters Delores Naeve, Charlotte Barber, and Marilyn Haug and brothers Mount Oliver Jr., and Jerry. www.harrisfuneralservices.com

The family of Richard M. Kinseth created this Life Tributes page to make it easy to share your memories.

Send flowers to the Kinseth family.