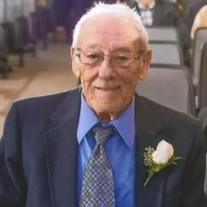 Richard “Dick” Lallier, age 87 of Algona, passed away on Friday, May 6, 2022at Kossuth Regional Health Center in Algona. Memorial Services will be held on Wednesday, May 11, 2022 at 10:30 AM at the First United Methodist Church in Algona. Services will be live streamed on www.lentzfuneralhome.com. Inurnment will take place at Riverview Cemetery in Algona. Visitation will be held on Tuesday, May 10, 2022 from 4:00 PM until 6:00 PM at Lentz Funeral Home in Algona. Richard Raymond Lallier was born on August 25, 1934 to John T. and Mary (Kunkel) Lallier. He attended school in St. Benedict and then went to work at numerous gas stations until he started working at the Ford Garage as a mechanic. When the Ford Garage closed he went to work for Everds Brothers and then Blacktop Service until 1996 when he retired. After retiring he started a new career as a school bus driver for Algona Community Schools. He retired from that in 2019. In his spare time he worked at River Road Golf helping where needed; mostly mowing. He worked until this year at River Road. On top of all these jobs, he was a volunteer fireman for the Algona Fire Department for 14 years. He was united in marriage to Peggy Patton on August 27, 1955. They were happily married for almost 67 years. He enjoyed golfing, and his greatest joy were his kids, grandkids and great grandkids. They were his pride and joy. His face lit up when any of them walked in. He was a simple quiet man. He was always there for his family and his kindness will be missed greatly. He was an avid Vikings and Twins fan, but most of all, Dick loved his family. Left to cherish Richard’s memory is his wife of 66 years, Peggy; children: Linda (Dick) Manske of Algona, Diane (Russ) Bruns of Titonka, Marlene Lallier of Humboldt and Todd (Mindy) Lallier of Baldwin City, KS; grandchildren: Scott (Jess) Manske of Algona, Angie (Donnie) Teeter of Albert Lea, MN, Jenny (Zack) Ostercamp of Britt, Jaci (Josh) Cox of Johnston, Joni (Keith) Hefley of Gowrie, Emily (Lou) Patterson of Kansas City, KS and Makayla Lallier of Edgerton, KS; great grandchildren: Tyler, Alex, Nathan and Jack Manske, Drew and Noah Teeter, Bo and Ivy Ostercamp, Josiah, Eli, Abel, and Silas Cox, Shayden and Cooper Hefley and George Patterson; sister, Luella (Dick) Potratz; brother, Marv (Caryle) Lallier; and sister in laws, Delores Lallier and Anita Lallier. He was preceded in death by his parents; brothers: Arnie and Kenny Lallier and sisters: Delores Lesher and Mareen Watterman.

The family of Richard Lallier created this Life Tributes page to make it easy to share your memories.

Richard “Dick” Lallier, age 87 of Algona, passed away on Friday,...

Send flowers to the Lallier family.