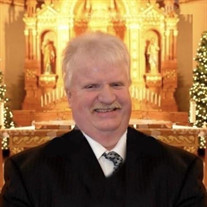 Richard Langel, age 63, of West Bend, passed away on Thursday, January 6th at the University of Iowa Hospital and Clinics. Mass of the Christian Burial will be 10:30 AM on Monday at the Divine Mercy Catholic Parish – St. Peter and Paul in West Bend. Burial will take place in the West Bend Cemetery. Visitation will be 4 – 7 PM Sunday at the Church, with a 3:45 PM Knights of Colombus Rosary. Rick’s life began when he met the love of his life (she had a bad habit of stealing his car out from under him), Ann. They became a family on February 26, 1983 (we had to find their marriage license because neither could agree on the year they we married). Four sons joined them, Scott, Will, Alex and Seth. Each one expanded Rick’s heart, he loved them more than life itself. They in turn, gave him his greatest role in life … making him a Grandpa, eleven times over … and his heart grew some more. Rick made friend everywhere he went and from all walks of life, often leaving us wondering how and where DID he ever meet them. He loved jokes and laughter. Rick quietly lead by example loving God and his Catholic faith above all things. They weren’t just a family, they were a unit, you married one, you married all. He was one of the good guys…and we were lucky to call him ‘ours’. On March 20, 2012 Rick’s heart broke when his granddaughter, Ava, went to live with God, making the competition between Rick and Ann stiff to be with her first…Rick won the race (all that running was hard on him) imagine the joy on his face when they were reunited. Rick asked God for a life full of love, happiness and wealth, He sent him his family. He was a lifelong member of the Cenex University and the Heinrichs family. Richard L. Langel was born on July 20, 1958 in Carroll, Iowa, a son of LaVern and Louetta (Hoffman) Langel. He grew up on a farm near Templeton, Iowa. He was a hog producer for most of his life. He owned and operated Rick’s Bar and Grill (his dream not Ann’s). Rick also trucked and worked for Clear Creek Farms. Left to carry Rick’s memories are his wife, Ann; sons, Scott of Mooreland, Will (Brittany), Alex (Jackie) and Seth (Katie) all of West Bend; grandchildren, Mitch, Hunter, Wesley, Kade, Penny, Elliette, Ashlyn, Quynn, Oaklyn and Madilyn; father, LaVern Langel of Templeton; siblings, Jim Langel of Newell, Joni of Urbandale and David (Allison) of Coon Rapids; favorite out-laws, Paul (Kathy) Heinrichs, Tom (Pat) and Tim (Denise) Heinrichs all of Carroll; and many nieces and nephews. He was preceded in death by his granddaughter, Ava Irene Stevens; his mother, Louetta Langel; and his in-laws, Al & Irene Heinrichs.

Richard Langel, age 63, of West Bend, passed away on Thursday, January 6th at the University of Iowa Hospital and Clinics. Mass of the Christian Burial will be 10:30 AM on Monday at the Divine Mercy Catholic Parish &#8211; St. Peter and Paul... View Obituary & Service Information

The family of Richard Langel created this Life Tributes page to make it easy to share your memories.

Richard Langel, age 63, of West Bend, passed away on Thursday,...

Send flowers to the Langel family.