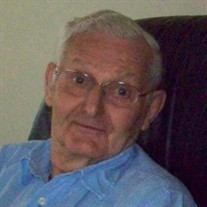 Richard Sarchet, age 88, of Algona passed away on Thursday, September 30, 2021 at his home in Algona. Funeral services will be at 10:30 AM on Tuesday at the First Lutheran Church in Algona. Services will be livestreamed on Lentz Funeral Home's Facebook Page. Burial will be at East Lawn Cemetery in Algona, with military rites conducted by the Iowa Army National Guard Honor Guard and the VFW Post #2541 and the Hagg-Turner American Legion Post #90 of Algona. Visitation will be from 4:00 PM until 7:00 PM on Monday at Lentz Funeral Home. Richard Roy Sarchet was born on April 17, 1933 to Roy and Bertha (Spear) Sarchet on their farm in Algona, Iowa. He attended Algona High School and graduated in 1951. In 1954, Richard enlisted in the United States Army and served until 1956. He started working as a farmer and then later began working for Winnebago Industries in Forest City. On March 6, 1959, Richard was united in marriage with Mary Sarita Jergens in West Des Moines. One of Richard’s hobbies included gardening. He was always trying to plant different things such as peanuts, tobacco, and cotton. His favorite plants were hostas. He also really enjoyed bird watching. Richard loved sports and enjoyed cheering on the Algona Bulldogs, St. Louis Cardinals, and Iowa State. When he wasn’t doing his hobbies, he could be found enjoying his time with his family, especially his grandchildren and great grandchildren. Richard is survived by his children, Lisa (Bryan Swartzel) Sarchet of Johnston, Randy Sarchet of Valley Spring, SD, and Sandy (Jeff Probasco) Sarchet of Algona; 15 grandchildren, Tasha (Clint) Ludwig, Nicole (Christian) Schneider, Dustin (Jenna Reding) White, Brittney (Robert) Johnson, Tylor (Kelsey) Sarchet, Karley, Kaleb, Kaylen, Keegan and Kooper Sarchet, Jacob (Marisa) Jergenson, Bronson, Landon and Nolan Jergenson and Haylen Wellman; 12 great grandchildren; one great great grandchild; and sister-in-laws, Pat Taylor of Des Moines and Joan Barie of Estherville. He was preceded in death by his parents; wife; a daughter-in-law, Jodie Sarchet; a brother Howard; and sisters, Betty and Letty.

Richard Sarchet, age 88, of Algona passed away on Thursday, September 30, 2021 at his home in Algona. Funeral services will be at 10:30 AM on Tuesday at the First Lutheran Church in Algona. Services will be livestreamed on Lentz Funeral Home's... View Obituary & Service Information

The family of Richard Sarchet created this Life Tributes page to make it easy to share your memories.

Richard Sarchet, age 88, of Algona passed away on Thursday, September...

Send flowers to the Sarchet family.