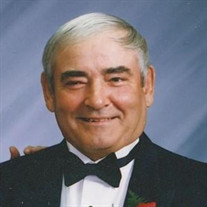 Not sure what to send?

Robert “Bob” Berte, age 92, of Bode passed away on Friday January 14, 2022 at the North Care Center in Humboldt. Memorial Mass of Christian Burial will be held on Saturday, June 25, 2022 at Sacred Heart Catholic Church in Livermore. Inurnment will take place at Mt. Calvary Catholic Cemetery in Livermore. Robert Charles Berte, the son of John and Margaret (Mergen) Berte, was born on June 15, 1929 on the farm near St. Joe. Bob served in the U.S. Navy during the Korean War. On June 20, 1960 he was united in marriage with Ruth Jensen in Livermore. Bob was a member of Sacred Heart Catholic Church in Livermore and a past member of the Livermore American Legion and the Algona VFW. He had served on the Board of Directors for the Bode Co-Op Elevator and the Board of Directors of U.S. Bank in Humboldt. Bob enjoyed fishing in Canada, having coffee with the guys at Norm’s in Bode and enjoyed social hour at the Red Lantern in Bode. He loved farming, mowing the yard and in the fall making his famous ham and bean soup for the hunters. Left to cherish Bob’s memory is his wife of 61 years, Ruth; children, Diane (John) Guigli of Shawnee, KS, Sharon (Jim) Stricker of Shawnee, KS, David (Shirley) Berte of Taylor, TX, Carolyn (Tobin) Smith of Dublin, OH, Ed Berte of Bode and Jennifer (Tom) Leuschen of Austin, TX; 13 grandchildren; 2 great grandchildren; brothers, Ernie (Bonnie) Berte of Milford and Albert (Alice) Berte of Livermore; sisters, Susie Altman of Algona, Sister Carol Ann of Dubuque, Florentine Orres of Fort Dodge, Bertha (John) Reding of Bode and Alverta Morrissey of West Des Moines. He was preceded in death by his parents; siblings, Eddie, Clarence, Harold, George and Rosemary.

Robert &#8220;Bob&#8221; Berte, age 92, of Bode passed away on Friday January 14, 2022 at the North Care Center in Humboldt. Memorial Mass of Christian Burial will be held on Saturday, June 25, 2022 at Sacred Heart Catholic Church in Livermore.... View Obituary & Service Information

The family of Robert "Bob" Berte created this Life Tributes page to make it easy to share your memories.

Send flowers to Robert "Bob"'s Mass of the Christian Burial.