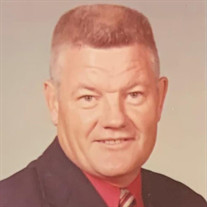 Robert Charles Nolan, 92, a life-long Emmetsburg resident and long-time high school teacher, died August 15th in Emmetsburg. Mass of Christian Burial will be held on Wednesday, August 18, 2021 at 10:30 AM at Holy Family Catholic Church in Emmetsburg. Burial will take place at Saint John's Catholic Cemetery in Emmetsburg. Military Honors will be conducted by the VFW Post #2295 of Emmetsburg. Visitation will be held on Wednesday from 9:30 AM until time of Mass at Holy Family Catholic Church in Emmetsburg. Lentz Funeral Home of Algona is assisting the family. The son of John Francis and Helen Ford Nolan, he was born June 7, 1929 in Emmetsburg where he lived most of his life. Bob loved sports, he excelled in football, basketball, baseball, and track at Emmetsburg High School. After graduation in 1947, he attended Emmetsburg Junior College, then matriculated to Iowa State Teachers College (now the University of Northern Iowa) earning his bachelor’s degree in 1951. Bob enlisted in the United States Army in October of 1951 and served until September of 1953. Bob continued with the Army Reserve until his Honorable Discharge in November of 1959. After his Army stint, Bob took on his first teaching position in 1953 at Lake Park (IA) Community School and was there for three years, he then taught history and coached at Terril (IA) High School for three years. Bob completed a master’s degree from Iowa Teachers College in 1958. He moved back home to take a teaching position at Emmetsburg Junior College where he also was Head Basketball Coach, Bob then moved on to teach at Emmetsburg High School until his retirement in 1989. Over the years, he continued his education with addition coursework at Montana State University, Columbia University, and Buena Vista University. At EHS, Mr. Nolan was both revered and feared for his dry wit and high standards. He was quick to call on anyone he thought had “a look of inspiration,” and provided students with many “educational experiences” (tests). After retiring from teaching in 1989, Bob enjoyed traveling to visit family, meeting friends for coffee and writing. He attended the famed Iowa Writer’s Workshop at the University of Iowa and subsequently wrote two novels; The Whitehurst Way was published in 2005, and its sequel, Back To Whitehurst in 2008. While a life-long bachelor, family was very important, it was imperative to all his nieces and nephews to get a picture taken with their dear Uncle Bob. Bob was an active member of Holy Family Catholic Parish. In addition to his parents, Bob was preceded in death by his brothers, John Jr., and Patrick Nolan; two sisters, Margery Berens, and Jean Nolan; and a nephew, Daniel Rouse. Survivors include his sisters, Anita Keifer of Iowa City, and Ruth (Dave) Rouse of Emmetsburg; sister-in-law Carole Nolan of Marion; plus 23 nieces and nephews and their children; and many friends. In lieu of flowers, memorial contributions may be directed to a scholarship fund being established with the Emmetsburg Educational Foundation in Bob’s name for students entering the field of education upon high school graduation.

The family of Robert "Bob" Nolan created this Life Tributes page to make it easy to share your memories.

Send flowers to the Nolan family.