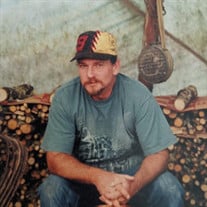 Robert Thomas, age 58 of LuVerne, passed away August 14, 2020 at his home. Memorial services will be held at a later date for friends and family to celebrate his life the way he would want it; outside and somewhere on the west coast. The Lentz Funeral Home of Algona is serving the family. Condolences may be left at www.lentzfuneralhome.com or sent to 108 Kossuth Ave., LuVerne, Iowa 50560. Robert Gordon Thomas, son of Malcolm and Irene Thomas, was born on November 11, 1961 in San Diego, CA. He had many trades in life, spanning from landscaping, large equipment operator, construction and even bridge building, he could do it all. As a child, Bob understood plants, animals and the wild outdoors. In his youth, he was active in Scouting and sports. In 1991, while living in Alaska, Bob met Barb and their journey began. At that point he started something very new, being a father to a pre-teenage girl. Bob and Barb were married in Reno, NV on June 3, 1997, while on a family road trip to the coast. Bob and Barb were very spontaneous, they could pack up and move just to follow the wind. Together they lived in many places; Alaska, Nebraska, Texas, Oregon, just to name a few; but they settled in Iowa to be close to their grandchildren and watch them grow. Bob loved his family very much; especially his grandchildren. He taught them never to be afraid to do anything, be it befriending snakes or going away to college. Life is what You make it, not others; so follow your dreams and do great things for You. Bob was an outdoors man and animal whisperer. He had a way with animals, furry and scaled alike. He had a charm that animals understood better than people, friends and family knew this and loved it about him. Bob loved his wife very much; they were inseparable in their journey together. In the beginning there were many road trips and storm chasing, towards the end, casino trips and sharing a slot machine for hours; everything together. On many of these road trips there would be stops. Bob could spot a $5 bill in the ditch, and make the family turn around for it. When his grandson was born it was a new experience for him that he took to with great enthusiasm, his name became Papa. Papa taught this little boy everything he could, from animals to respect and manners. After a few years with his grandson, Papa was bombarded with teenage girls again to help raise. He didn’t back down from a challenge, but embraced it instead. His grandchildren learned so much from him; it never mattered to Papa that he wasn’t blood related, these were his grandkids no matter what. Bob, Papa, lead a very full life with so many great stories to pass on, we all have our favorites, and the lesson learned from them; like don’t bring home baby bobcats. Bob is survived by his wife of 23 years, Barb; daughter, Gwen (Charles) Tracer of LuVerne, IA; grandchildren, Kaiel Tracer of LuVerne, IA, Jacilyn Valero of Des Moines, IA, Angel Hixson of Brookings, SD and Destiny Hixson of Norfolk, NE; Mother, Irene Thomas of Roseburg, OR; siblings, James Thomas of Roseburg, OR, Cynthia Bugado of Keizer, OR, Dan Thomas of Spring Ville, UT and Dave Thomas along with numerous other relatives and friends. He was preceded in death by his father, Malcolm Thomas in 2005.

Robert Thomas, age 58 of LuVerne, passed away August 14, 2020 at his home. Memorial services will be held at a later date for friends and family to celebrate his life the way he would want it; outside and somewhere on the west coast. The... View Obituary & Service Information

The family of Robert "Bob" Thomas created this Life Tributes page to make it easy to share your memories.

Send flowers to the Thomas family.