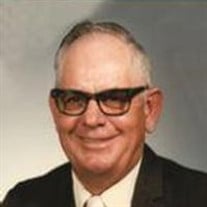 Rolland "Pete" Krug, 83 of West Bend died Saturday November 22, 2014 at his home in West Bend. Services will be held Wednesday, 10:30 AM at the United Methodist Church, West Bend with burial to follow at Riverview Cemetery, Algona. Visitation is from 5-7 PM Tuesday at the Harris Funeral Home in West Bend. Rolland George "Pete" Krug, the son of Louis and Violet (Salisburg) Krug was born January 10, 1931 in West Bend where he was raised and recieved his education. He was raised by his step mother Margaret Besch Krug. Pete was a Korean Conflict veteran, serving his country as an engineer from 1952-1954. He was united in marriage to Geraldine (Jeri) Grimm October 30, 1955 in West Bend. He worked at various jobs including the West Bend Lumberyard, the Hobarton Elevator, as well as working for various farmers in the area, including Orlo Osvig. Survivors include his children Virgil (Toni) Krug of Algona, Iowa, Steve (Lori) Krug of Algona, IA, and Sahron (John) Ohge of Livermore, IA, grandchildren:Sara, Amber, Darin, Shane, Dylan, Brennan and Brad, and one great grandson Jordan, brothers Frank and Earl Krug, sister Eleanor Cooper and special friend Becky Banwart. Pete loved hunting, fishing, card playing, having coffe with friends at the Villager, and "shooting the breeze". He was preceded in death by his parents, stepmother, wife, brothers Louis and Richard Krug and sister Martha Studer. www.harrisfuneralserivces.com

The family of Rolland Krug created this Life Tributes page to make it easy to share your memories.

Send flowers to the Krug family.