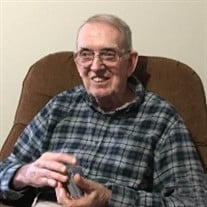 Ronald Dale Hillmer, the sixth and youngest child of August and Rose (Krieg) Hillmer, was born on November 2, 1934.  He grew up on a farm just north of Mallard, Iowa, graduating from Mallard High School in 1953.  After working for a couple of years, Ron volunteered for the army, and though an armistice to the Korean Conflict had been signed, he was sent there as an Army administrator for the Fifth Armored Division.  He served from April 1955 to February 1957.  He attended Mankato Commercial College, graduating in February 1958.  He worked for many years as a bookkeeper at International Harvester until the company folded.  Until his retirement he worked at Joyce’s Foodland in Emmetsburg. Ron never married or had children, but he faithfully cared for his mother until her death in 1985, and tended stray cats thereafter.  Ron served on the board of Lakeside Lutheran Home in Emmetsburg for many years, and was a longtime financial secretary, Sunday School superintendent, and member of the choir at Trinity Lutheran Church in Mallard, often tending to numerous important behind-the-scenes tasks.  He loved baseball, especially the St. Louis Cardinals, and enjoyed attending softball tournaments and stock car races.  He also followed local high school sports.  His nieces and nephews remember him fondly as the uncle who played games with them and took them fishing, to the Clay County Fair, and racing events.  But he was happiest when he was in the thick of a hotly contested card game. Ron suffered from ill health in his last two years, necessitating a long stay at St. Mary’s Hospital in Rochester in 2018.  He relocated to a nursing home in New Hampton, Iowa, near one of his nieces and her husband.  There he enjoyed renewed health and a robust social life, making numerous friends among the residents and staff.  Unexpected illness led to hospitalization in Mason City in late August; he died in hospice on the morning of September 2. Ronald was a man of deep faith.  Despite the challenges he faced, he never complained or took out any frustration he may have felt on anyone else.  The night before he died, with an oxygen mask covering his mouth, he enthusiastically joined in as his family sang his favorite hymns.  His joy for life, kind, easygoing nature, generosity, and faith in the midst of adversity, remain an inspiration to his family and friends. He is preceded in death by his parents and all five of his siblings.  Left to mourn him are his 14 nieces and nephews, their spouses and families, several cousins, the Trinity Lutheran Church congregation, and the new friends he made in New Hampton. In lieu of flowers, please send memorials to Trinity Lutheran Church, Mallard, Iowa     To plant Memorial Trees in memory of Ronald D. Hillmer, please click here to visit our Sympathy Store.

Ronald Dale Hillmer, the sixth and youngest child of August and Rose (Krieg) Hillmer, was born on November 2, 1934.  He grew up on a farm just north of Mallard, Iowa, graduating from Mallard High School in 1953.  After working for a couple of... View Obituary & Service Information

The family of Ronald D. Hillmer created this Life Tributes page to make it easy to share your memories.

Ronald Dale Hillmer, the sixth and youngest child of August and...

Send flowers to the Hillmer family.