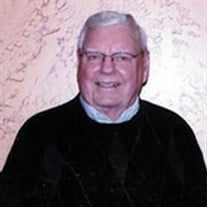 West Bend...Dr. Russell O. Drown, 89, died Saturday January 21, 2017 at the West Bend Care Center. Services will be held Tuesday 10:30 AM at Sts. Peter and Paul's Catholic Church, West Bend with burial to follow in the West Bend Cemetery. Visitation is from 4-7 PM Monday at the church in West Bend, where a rosary will be recited at 7PM. Harris Funeral Home is in charge of arrangements. Russel (Doc) O. Drown was born December 16, 1927 to Clifford and Mae (Hauge) Drown in Fostoria, IA. He graduated from the Milford High School in 1946. He then served two years in the United States Navy. He received his Chiropractic degree from the Logan Basic Chiropractic College, St. Louis Missouri, in 1954. After interning in Iowa City for 2 years, he opened his practice in West Bend, IA in 1956. Russ was married to Ilene Hansen in 1951 and after divorcing, married Marjorie Dahlhauser in 1996. Russ was active in his community; as a former City Council member, as an instrumental person in the establishment of the West Bend Care Center, a member of Harry A. Anderegg Legion Post #151; where he served as Vice Commander for many years, a life member of the Knights of Columbus, a charter member and former officer of the Board of Directors of the Foundation for the Advancement of Chiropractic Research, he held a Life Membership of the Iowa State Chiropractic Association and served on its Board of Directors and a former member of the American Chiropractic Association. He retired in 1995. Russ and Marge spent 14 winters in Mesa, AZ. Survivors include his wife Marjorie, West Bend, IA, children: Mary (Greg) Moser of Emmetsburg, IA, Jane Curl of Des Moines, IA, Jim Drown of Emmetsburg, IA, and Thomas (Tammie) Drown of George, IA, grandchildren: Jody (Nate) Kajewski, Theresa Coleman, Talon, Tiffany and Damon Drown; great grandsons: Brennan and Blake Kajewski; stepchildren: Lynn, Michael and Lisa Dahlhauser, sister Beverly Sporrer of Milford, IA; and 8 nieces and nephews. He was preceded in death by his father in 1971 and mother in 1998, son-in-law Randy Curl in 2010 and brother-in-law Floyd Sporrer in 1999. Russ enjoyed playing shuffleboard, cards with family and friends and coffee time with friends at Cenex and The Villager. Russ was very proud, while reaching the age of 89 years, he was in his 90th year.

The family of Dr. Russel O. Drown created this Life Tributes page to make it easy to share your memories.

Send flowers to the Drown family.