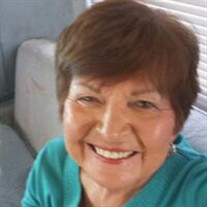 Click here to view/print Funeral Folder                                                                                                          Sandra Kay ‘Sandy’ Whitehurst, age 76, of West Des Moines, Iowa, passed away on Friday, May 22, 2020, at Palo Alto County Hospital in Emmetsburg, Iowa.She was born to the late William and Lela (Jackson) Sloter, in Kanawha, Iowa, on July 27, 1943.  At an early age, the family moved to Corwith, Iowa.  Sandy was baptized and confirmed at St. John’s Lutheran Church in Corwith, attended Corwith schools and graduated from Corwith-Wesley High School in 1961, then attended Wartburg College in Waverly, Iowa.  She met her future husband, Robert Whitehurst, at a dance in Clear Lake, Iowa, and they were married on November 23, 1963.  Sandy and Bob made their first home in Omaha, Nebraska, where they welcomed their daughter, Lori, in January, 1967.  They lived in several Midwest states before settling in Algona, Iowa in 1985, where they resided for 12 years.  After 34 years together, Bob passed away in January, 1998, and Sandy moved to Clear Lake to be near Lori, her son-in-law Danny Boyken, and granddaughters McKenna and Madison.  She later moved to West Des Moines where she was living at the time of her death.  She was a member of Hope Lutheran Church in West Des Moines. Sandy was a devoted wife, mother, grandmother and friend.  Among her many activities, she loved traveling to Columbia, Missouri, to spend time with Lori, Dan, McKenna and Madison.  She especially enjoyed watching McKenna cheerleading and watching Madison play volleyball and soccer.  She had a big heart, was a great problem-solver and always found time to lend a sympathetic ear and a helping hand when needed.  Where her family and friends were concerned, no problem was ever too large or too small!In 2008, Sandy met Rick Salz and they spent many wonderful years together traveling in their motor home and enjoying life to the fullest, which included frequent trips to Columbia to be with ‘their girls’.  She loved traveling, being with family and friends, playing games and just enjoying life – and she always enjoyed a good laugh!  She approached life with energy, positivity and a can-do attitude and was a joy to be around.  She had many friends, and was a good friend.  She was kind, caring, helpful, faithful and loving – we are grateful to have had her in our lives.  She was dearly loved and will be missed. Sandy is survived by her daughter, Lori, of Columbia, Missouri, and granddaughters, McKenna and Madison, also of Columbia.  Her brothers, James (Marsha) Sloter, Algona, Iowa; Julian (Marlene) Sloter, Atlanta, Georgia; Don (Freda Thornbrough) Sloter, Council Bluffs, Iowa; sister-in-law Paula Sloter, Omaha, Nebraska; her long-time partner, Rick Salz, of West Bend, Iowa; nephews and nieces, Mike (Karen) Sloter, Loveland, Colorado; Dennis (Maureen) Sloter, Boca Raton, Florida; David (Judy) Sloter, Charles City, Iowa; Douglas Sloter, Aspen, Colorado; Daryl (Michelle) Sloter, Atlanta, Georgia; Diane (Jeff) Bostic, Atlanta, Georgia; Patrick (Kelly) Sloter, Lyons, Colorado; Barry (Chuve) Sloter, Omaha, Nebraska; Donald Sloter II, Omaha, Nebraska; and many cousins, great-nephews and great-nieces.  She is preceded in death by her parents, William and Lela Sloter; husband Robert Whitehurst; brother Dean Sloter; son-in-law Danny Boyken; and nephews Daniel Sloter and Brian Sloter.Funeral services will be held at 11 a.m. on Wednesday, May 27, 2020, at Harris Funeral Home in Mallard, Iowa, with Reverend Kris Leaman of Ft. Dodge officiating.  Harris Funeral Home in West Bend is assisting the family.  Visitation is one hour prior to services at the funeral home with burial to follow at Concorde Township Cemetery in Garner, IA. www.harrisfuneralservies.com

The family of Sandra Kay Whitehurst created this Life Tributes page to make it easy to share your memories.

Send flowers to the Whitehurst family.