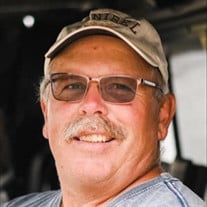 Scott Cook, age 55 of Algona, passed away peacefully Saturday, May 7, 2022 at MercyOne North Iowa Hospice in Mason City. Funeral services will be held on Friday, May 13, 2022 at 11:00 AM at Trinity Lutheran Church in Algona. Services will be live streamed through Trinity Lutheran Church's YouTube page https://youtu.be/628yiegnhok. Burial will take place at a later date. Military Honors will be conducted by the National Guard Honor Guard and the Algona VFW Post # 2541. Military Honors will be live streamed on Lentz Funeral Home's Facebook page: https://www.facebook.com/Lentz-Funeral-Home-122511234501273. Visitation will be held on Thursday, May 12, 2022 form 4:00 PM until 7:00 PM at Trinity Lutheran Church's Life Center. Scott Arthur Cook, son of Sheridan and Janice (McMullin) Cook, was born on September 18, 1966 in Algona, Iowa. Scott graduated from Algona High School in 1985. While in high school, he was involved in 4H and FFA. Following school, he attended Buena Vista College for two years and then Hawkeye Tech for one year. After college Scott welcomed his first child Jessica in 1988 and his second child Adam in 1990. Scott was a member of the Iowa National Guard and served for 21 years. He also served as a volunteer fireman on the Algona Fire Department for 20 years. On May 10th, 1997, Scott was united in marriage to Gina Ristau. Scott was an energetic young man. He owned Scott Cook Construction and loved spending time working with his employees. Besides work, Scott also loved fishing, traveling, his “toys”, and making jokes. He was known for his humor and many one liners. But most of all, Scott loved his kids, grandkids, dog Moose, and cats, Fred and Ethel. Left to cherish Scott’s memory are his children, Jessica (Buck) Gulley of Mesa, AZ and Adam (Angela) Cook of Mesa, AZ; four grandchildren, Scarlett Gulley, Montana Gulley, Finn Cook, and Luke Cook; parents, Sheridan Cook and Janice Cook; sisters, Sheryl (Steve) Mertz and Lynn (Ernie) Wolter; dear friend, Gina Cook, and several nieces and one nephew and several great-nephews and one great niece. He is preceded in death by his grandparents.

Scott Cook, age 55 of Algona, passed away peacefully Saturday, May 7, 2022 at MercyOne North Iowa Hospice in Mason City. Funeral services will be held on Friday, May 13, 2022 at 11:00 AM at Trinity Lutheran Church in Algona. Services will... View Obituary & Service Information

The family of Scott Cook created this Life Tributes page to make it easy to share your memories.

Send flowers to the Cook family.