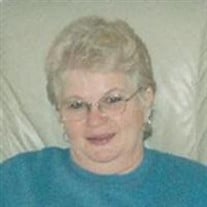 Mallard...Sheila Ann Anderson, 62 of Mallard died Thursday, March 31,2016 at the Mayo Clinic in Rochester, Minnesota. Services will be held Tuesday, 10:30 AM at the United Methodist Church, Mallard with burial to follow in Ellington Cemetery, Mallard. Visitation is from 4-7 PM Monday at the church. Harris Funeral Home in Mallard is in charge of arrangements. Sheila Ann Wermersen, the daughter of Robert and Ruth (Wood) Wermersen was born May 18, 1953 in Emmetsburg, Iowa where she was educated, graduating from the Emmetsburg High School in 1972. She was united in marriage with Gary Anderson at the United Methodist Church in Mallard. The couple lived for a time in Laurens before moving to their farm in Mallard where they lived for many years. Sheila worked with Gary on the farm and later was employed at various places including restaurants in Cylinder and Mallard, Casey's in West Bend and Sparky's in Mallard, as well as SNC Manufacturing and the Wild Rose Casino in Emmetsburg. Survivors include her husband Gary of Mallard, IA, children: Teana (Daryl) Zech of Stanley, IA, Cary (Kari) Anderson of Cylinder, IA, Scott Anderson of Algona, IA, and Dean Anderson of Plover, IA, grandchildren: Ashley, Andrew, Kali, Jordan, Madelyn, Wesley, and Kade, brother Rick Wermersen of Mallard, IA, Roberta Colsrud of Mallard, IA, and Vickie Schneider of Mallard, IA. Sheila was a member of the Mallard United Methodist Church where she volunteered as a Sunday School Teacher and the ladies groups of the church. She was a 4-H Leader for 25 years, she followed her children's activites at school, where she was active in music boosters. She was also a member of the Palo Alto County Pork Producers(the Porkettes). Preceding Sheila in death were her parents, and sister Debra Alderson. www.harrisfuneralservices.com

Mallard...Sheila Ann Anderson, 62 of Mallard died Thursday, March 31,2016 at the Mayo Clinic in Rochester, Minnesota. Services will be held Tuesday, 10:30 AM at the United Methodist Church, Mallard with burial to follow in Ellington Cemetery,... View Obituary & Service Information

The family of Sheila Ann Anderson created this Life Tributes page to make it easy to share your memories.

Send flowers to the Anderson family.