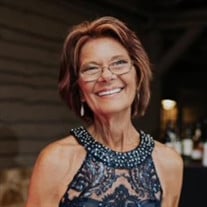 Shelly Ehrhardt, age 65, of Humboldt passed away on April 7, 2021 at her home surrounded by family. Memorial Mass will be 11:00 AM on Tuesday at St. Mary’s Catholic Church in Humboldt. Visitation will be 9:30 – 10:30 AM Tuesday at Lentz Funeral Home in Humboldt, with masks required. Shelly Jolene Ehrhardt, the daughter of Tod and Letha (Cokley) Smith, was born on February 10, 1956 in Charles City, Iowa. She was raised in Nashua, IA on the family farm until her family relocated in 1973 to Dakota City, Iowa, where she graduated from Humboldt High School in 1974. On January 15, 1976 she married Jerry Ehrhardt and they raised their two children (Mandy and Joe) in Dakota City, IA. Throughout their marriage they lived in Iowa, Texas and Florida. Shelly worked for many years in her parents’ restaurant, Tod’s Café, and worked at St. Mary’s school in the lunch program. She and her husband relocated to Florida in 2006 to help with the Born Free Sales lot. Her lifelong dream of becoming a nurse was fulfilled when she graduated nursing school at the age of 55. In 2011, she moved to Texas to be near her grandchildren. Shelly’s main goal in life was to do whatever made her grandkids happy and she succeeded! Her greatest joy was her grandchildren, she loved playing games, sleepovers, shopping trips, attending their activities and just laying in bed watching a movie with them. She was an avid gardener and loved planting her flowers and tending to them. Shelly is survived by her husband of 45 years, Jerry; a daughter, Mandy (Sam) Gambarin, Pflugerville, TX; a son, Joseph Ehrhardt, Des Moines; grandchildren, Bailey, Mazie and Payton Geitzenauer, Pflugerville, TX, Ruby and Wyatt Ehrhardt, Des Moines; parents: Tod and Letha Smith, Dakota City; brothers, Dennis (Vicky) Smith, Dakota City, Rick Smith, Dakota City, Tom Smith, Barnum, Larry (Linda) Smith, Pleasant Hill; a sister, Cathy Gaydos, Phoenix, AZ; sister in laws, Janice Limerick, College Station, TX, Judy (Tom) Turbiville, College Station, TX; and numerous nieces and nephews. She was proceeded in death by, In Laws Ed and Norma Ehrhardt; and Sister in laws Jean Vought and Jill Lens.

The family of Shelly Ehrhardt created this Life Tributes page to make it easy to share your memories.

Send flowers to the Ehrhardt family.