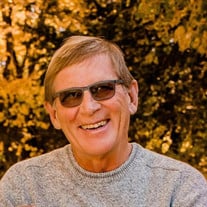 Steven "Steve" Peters, age 68 of Humboldt, passed away Friday, December 31, 2021 at the Humboldt County Memorial Hospital. Funeral Services will be held on Saturday, January 8, 2022 at 1:00 PM at Zion Lutheran Church in Humboldt. Burial will take place at Indian Mound Cemetery. Visitation will be held on Friday, January 7, 2022 from 4:00 PM until 7:00 PM at Zion Lutheran Church in Humboldt. Lentz Funeral Home of Humboldt is assisting the family. Services will be live streamed on Lentz Funeral Home's page. Steven Richard Peters, son of Richard and Pola (Ericksen) Peters, was born on July 24, 1953 in Harlan, Iowa. He graduated from Shelby-Tennant Community High School in 1971. After graduation, Steve enlisted in the Air Force in September of 1971. During his time in the Air Force, he was stationed in Southeast Asia including Thailand and Okinawa before returning stateside to Tyndall Air Force Base in Florida. While enlisted Steve was an avionics instrument system specialist where he worked on various jet aircraft including F-4 “Wild Weasel,” F-106, F-101, T-33, C-130 gunships and Huey helicopters. He was honorably discharged at a rank of staff sergeant in August of 1975. Steve took pride in his time in the Air Force and enjoyed sharing his stories whenever he could. After his service in the Air Force, he attended Iowa State University where he graduated with a Bachelor of Science Degree in Animal Science in May of 1978. On February 18, 1989, Steve married his wife Joyce Marie Dobson in Scranton, Iowa. The couple has four children: Kyla, Dylan, Sarah and Kelsey. Steve retired from North Central Cooperative in 2016. After retirement he worked for Z-T Enterprise on a part-time basis. Steve also volunteered as the soundboard operator for the Humboldt Community Chorus for over 20 years. Steve’s love and passion for water was sparked while he was stationed in Florida at Tyndall Air Force Base. He enjoyed taking his family to the East Coast and Florida for fishing and diving trips. Many weekends you would find Steve with family and friends at the lake enjoying time tubing, skiing and at the beach. When he wasn’t at the lake he loved spending time with his grandkids, fishing, biking, cheering on the Iowa State Cyclones, and searching for golf balls on the way to the mailbox. Steve loved spending time in the backyard on the river grilling, fishing, and kayaking. He enjoyed watching his kids participate in Humboldt Wildcat activities. Over the years, Steve loved taking trips with Joyce to many different places around the world and country. Left to honor Steve’s memory is his wife of 32 years, Joyce of Humboldt; children: Kyla (Chris) Frehse and their children: Easton, Jaxx and Kash of Jefferson, Dylan (Chelsea) Peters and their child Xander of Oviedo, Florida, Sarah (Chris) Detrick and their child Grace of Humboldt, and Kelsey Peters and Jordan Edwards of Norwalk; sisters: Carol Brigandi of Omaha, Nebraska, Becky (Richard) Udron of The Villages, Florida and Rita (Kevin) Epperson of Council Bluffs; many nieces, nephews, family, friends and his best furry friend Smokey. He was preceded in death by his grandparents; parents, Richard and Pola Peters; sister, Judy Peters and his miniature poodle, Cocoa.

The family of Steven "Steve" Peters created this Life Tributes page to make it easy to share your memories.

Send flowers to the Peters family.