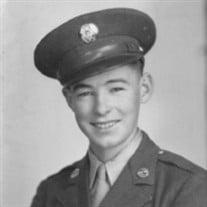 Mallard...Theodore J. "Ted" Larson, 93 of Mallard died September 20, 2019 at the Palo Alto County Hospital in Emmetsburg. Private graveside services will be held 11:00 AM Wednesday September 25, at Rush Lake Cemetery, Mallard.  The family invites all from the community to a time of fellowship and refreshments at the PC Harris Hall, 409 S. 6th Street, Mallard from 11:30-1:00 PM.  Ted Larson, the son of Carl and Catherine (Eller) Larson was born August 13, 1926 in Algona, Iowa . He was raised and educated in Mallard.  Ted enlisted in the United States Armed Forces and served from 1944-1946. Upon returning to the states, Ted as assigned to four-star General Anthony C. McAuliffe, at the Pentagon in Washington, DC. as his personal secretary. In January of 1949 he was united in marriage with Norma McCullough in Jackson, Minnesota.  The couple lived their married lives in Mallard.  Ted owned and operated Larson Oil Company service stations in West Bend, Pocahontas, Laurens, Ruthven, Emmetsburg and Mallard during his lifetime.  The Mallard site was in town for the better part of 60 years.  Survivors include his wife Norma, Mallard, IA, sons Rick (Linda) Larson of Branson, Missouri and Mike (Joy) Larson of Orange City, Iowa, 13 grandchildren along with many great grandchildren and 1 great great grandchild.  Ted was greatly involved with the planning and subsequent building of the Spring Hills Golf Course in Mallard (1969), which is still operating today. His grandchildren remembers his quick "one liners" he used when visiting with them.  Ted was preceded in death by his parents, brother Andy, 1/2 sister Faun Della Larson, and his children Mark, Ron and Colleen.  www.harrisfuneralservices.com

The family of Theodore J Larson created this Life Tributes page to make it easy to share your memories.

Send flowers to the Larson family.