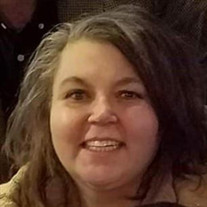 Tracey (Lawhorn) Bruellman, age 50 of Algona formerly of Aurora, Colorado, passed away Monday, October 4, 2021 at the Trinity Regional Medical Center in Fort Dodge, Iowa. A Celebration of Life will be held on Friday, October 15th from 4:00 PM until 7:00 PM at Water's Edge Nature Center in Algona. Memorials may be directed towards Tracey’s family. Lentz Funeral Home of Algona is in charge of arrangements. www.lentzfuneralhome.com Tracey was born on March 30, 1971 in Chattanooga, Tennessee. When she was 8, her family moved to Denver, Colorado. While growing up in Denver, Tracey played the violin and was first chair in the High School Orchestra. She graduated from Aurora Central High School. After graduation, Tracey attended community college and earned a degree in Criminal Justice. On May 17, 2003, Tracey was united into marriage to Brent Bruellman in Denver, Colorado. To this union two boys were born, Connor and Carson. The family moved to Iowa eight years ago and have made their home in Algona. Tracey was an animal lover. She loved cats and dogs and even took in a turtle. Most of all, Tracey loved her boys, Connor and Carson. She was always looking up how the boys were doing in school on her phone. She spent a lot of time cheering on the Denver Broncos and watching her favorite TV shows; SVU Law & Order, Blue Bloods, Saturday Night Live, and the ID Channel. Tracey was outgoing and personable and was a friend to everyone. She had a kind heart and would always get a gift for someone out of the blue. On October 4, 2021 Tracey passed away with her family by her side. Left to cherish Tracey’s memory are her husband of 18 years, Brent of Algona; sons, Connor and Carson of Algona; brother, Chuck (Melanie) Lawhorn and their children of Coda and Taryn of Aurora, Colorado; uncle Dale Bryant and aunt Joy Giles both of Chattanooga, Tennessee; best friend, Evvy Shipman of Arvada, Colorado; in-laws that considered her a sister, John (Cindy) Bruellman, Marla (Bill) Berg, Kandy (Henry) Jackson and Steve Bruellman along with numerous other family members and friends. Preceding her in death are her parents, Art and Mary “Lucky” (Bryant) Valdez.

The family of Tracey Bruellman created this Life Tributes page to make it easy to share your memories.

Send flowers to the Bruellman family.