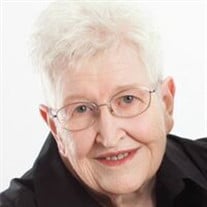 Click here to view/print folder Virginia Ann Reinders April 17, 1931 – July 4th, 2020 Virginia Ann Reinders, 89, formerly of Mallard, Iowa died Saturday, July 4, 2020, at Fountain View Retirement Community in Omaha, Nebraska.  Services will be held 11:00 AM Friday July 10, 2020, at the United Methodist Church, Mallard with burial to follow in Rush Lake Cemetery.  Friends may visit (observing social distancing) from 9:30-time of service at the church on Friday.  Harris Funeral Home of Mallard is assisting the family. Virginia Ann Booth, the daughter of George and Ruth (Henry) Booth, was born April 17, 1931, in Sioux City, Iowa, where she was raised, received her education and graduated from East High School in 1949. She attended the Iowa State Teachers College in Cedar Falls, Iowa.  On June 13, 1959, she united in marriage with Raymond Reinders in Sioux City, Iowa and to this marriage two children were born, Ann and John.  Virginia taught school first in Emmetsburg then in Mallard, a total of 38 years, retiring in 1991.  She also taught piano lessons in her home for many years. Ray and Virginia made their home in Mallard the majority of their married lives before relocating to Omaha, Nebraska, in 2008, to be closer to their family.  Virginia was a member of the United Methodist Church, Mallard, where she was a circle member, choir director and organist for many years. After moving to Omaha, they became members of the Countryside Community Church. She was a past matron of the Eastern Star and a Legion Auxiliary Member, as well as a member of Mallards Women’s Club. She truly loved music and was apt to break out in song at any time or any place. Survivors include her son John and his wife Angela of Omaha Nebraska, son-in-law Dan Biere of Eden Prairie, Minnesota, grandsons Nicholas Biere of Chicago, Illinois, Timothy Biere and wife Caitlin of Chicago, Illinois and Dillon Reinders of Omaha, Nebraska, sister-in-law Alice Reinders of Emmetsburg, Iowa, and sister-in-law Mary Olt of Dayton, Ohio.  Preceding her in death were her parents George and Ruth Booth, husband, Raymond, daughter Ann, brother-in-law Milo Reinders, and brother-in-law Donald Olt.  www.harrisfuneralservices.com

The family of Virginia Ann Reinders created this Life Tributes page to make it easy to share your memories.

Send flowers to the Reinders family.