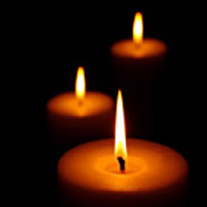 Virginia M. Skow Virginia Mae Boger, the second daughter of Henry and Hazel (Hein) Boger was born June 11, 1928 in Denison, Iowa and passed away on November 8, 2014 at Regency Park Nursing and Rehab in Jefferson, Iowa at the age of 86 years, 4 months and 28 days. Virginia grew up in South Dakota and Iowa and met her future husband, Richard Skow while working in her parents' restaurant in Gilmore City, Iowa. They were married on August 27, 1947 and that union was blessed with four children; Karen Kay, Rickie Allen, Sandra Sue, and Curtis Dean. They lived their entire lives in Gilmore City, until a decline in Virginia's health required a move to care facilities in Humboldt, Fort Dodge, and Jefferson. Virginia worked a number of jobs and for nearly 30 years she was a hot-lunch-cook, and the head hot-lunch-cook for The Gilmore-Bradgate-Community-School, before retiring in 1991. She always loved her time working for the school and all of the kids and teachers she was able to spoil a little with her favorite cinnamon-rolls or treats. She also enjoyed making family dinners, playing in several card clubs, community activities and would "go shopping" almost any time and place. She never met a stranger and her coffee pot was always on for anyone who stopped by. She was an active member of the Gilmore City United Methodist Church and the American Legion Auxiliary. She was preceded in death by her parents, her husband Richard in 1990, son Curtis in 1962, son-in-law David Tucker, brothers Myron and Virgil Boger, and sister and brothers-in-law, Hazel, O.C. Walker, and Cyril Ehrig. Left to morn her passing are her son, Rick (Renee) Skow of Olathe, Kansas, daughters Karen (Cal) Martin of Lincoln, NE and Sandra Tucker of Des Moines, IA and grandchildren, Raena Skow of Lenexa, KS, Christi (George) Hanzel of Bloomfield Hills, MI, Clint Martin of Sioux City, IA and Ryan Roberts of Des Moines, IA, And Great-Grandchildren, Sydney, Lauren and Georgia Hanzel and Ryan and Cierra Roberts. And her sisters Norma Ehrig of Ames and Sharon (Gerald) Luppen of Rock Island, IL, brothers, Don (Dee) Boger of Denver, IA, Dick (Wilma) Boger of Aplington, IA and sister-in-law Georgia Boger of Ackley, IA, brothers-in-law Gerald (Avalee) of Sacramento, CA, and Robert (Judy) of Thorntown, IN and many nieces, nephews cousins and friends. Virginia's family would like everyone to remember her quick and ready smile and ability to never know a stranger. Visitation will be held at the Harris Funeral Home on Friday evening November 14, 2014, with the family present from 5:30 to 7:30. Funeral services will be held on Saturday, November 15, 2014 at 10:00 a.m. at the United Methodist Church in Gilmore City, with burial at the Union Cemetery Humboldt, Iowa. There will be lunch at the church following the burial. In lieu of flowers please send memorials to the Gilmore City United Methodist Church or the Alzheimer's Association.

Virginia M. Skow Virginia Mae Boger, the second daughter of Henry and Hazel (Hein) Boger was born June 11, 1928 in Denison, Iowa and passed away on November 8, 2014 at Regency Park Nursing and Rehab in Jefferson, Iowa at the age of 86 years,... View Obituary & Service Information

The family of Virginia Mae Skow created this Life Tributes page to make it easy to share your memories.

Send flowers to the Skow family.