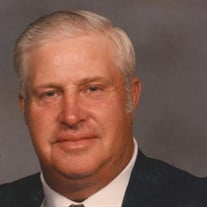 Wendell Christensen Sr., age 84 of Wesley, passed away, Tuesday, June 15, 2021 at the Titonka Care Center in Titonka. Funeral services will be held on Friday, June 18, 2021 at 2:00 PM at St. John's Lutheran Church in Burt. Services will be live streamed on St. John's Lutheran Church's YouTube page https://youtu.be/KncpeKommW0. Burial will take place at Buffalo Township Cemetery in Titonka with Military Honors Conducted by the Iowa National Guard Honor Guard. Visitation will be held on Thursday from 4:00 PM until 7:00 PM at St. John's Lutheran Church in Burt. Wendell Clair Christensen, the son of Clarence and Gladys (Bentley) Christensen, was born on December 19, 1936, in Algona. He graduated from Algona High School in 1954. Following high school, Wendell continued his education at Iowa State College and graduated with a degree in Ag Education in 1958. Wendell was active in the ROTC at Iowa State and graduated with a rank of Second Lieutenant. Upon graduation, Wendell enlisted in the Army Reserves and was honorably discharged after 10 years of service having achieved the rank of Captain. Wendell taught Voc Ag for one year at Titonka until he decided to pursue his passion of farming. On November 23, 1956, Wendell was united in marriage with Esther Mary Anne Hasse in Burt. This marriage lasted more than 63 years until Esther’s passing in August 2020. Wendell was a member of St John’s Lutheran Church in Burt where he served as an Elder, Trustee, and President. He was an avid and lifelong advocate of soil and water conservation. He and his family planted too many trees to count and he employed many conservation practices on his farm land. Wendell served on the Kossuth County Soil and Water Conservation District board for 50 years. He was also a 4-H leader, active member of the Kossuth County Pork Producers, and a past Farm Bureau President. Wendell also served as a State Soil Conservation District Commissioner for many years. Wendell and his family received a Century Farm Award in 1997 at the Iowa State Fair. In July 2020, Wendell was awarded the 2020 Kossuth County Farm Bureau Distinguished Service to Agriculture Award. Wendell loved trapshooting, bowling, playing bridge, collecting wildlife art, and going on annual fishing and hunting trips. Some of his favorites were a hunting trip to the Yukon and Farm Bureau trips to Hawaii and Europe. Left to cherish Wendell’s memory are his children, Mary (Brad) Shipman of Cedar Rapids, Wendell (Teresa) Christensen Jr. of Wesley, Clark (Allison) Christensen of Algona, Charles Christensen of Wesley, Suzanne Bryan of Westfield, IN and Andrew (Maggie) Christensen of Kanawha; 16 grandchildren and 10 great grandchildren. He was preceded in death by his parents, Clarence and Gladys Christensen; wife, Esther and two brothers, Wilbur and David Christensen. Memorials may be made in Wendell’s name and directed to St. John’s Lutheran Church. The Lentz Funeral Home of Burt is serving the family. Condolences may be left at www.lentzfuneralhome.com

Wendell Christensen Sr., age 84 of Wesley, passed away, Tuesday, June 15, 2021 at the Titonka Care Center in Titonka. Funeral services will be held on Friday, June 18, 2021 at 2:00 PM at St. John's Lutheran Church in Burt. Services will... View Obituary & Service Information

The family of Wendell Christensen Sr. created this Life Tributes page to make it easy to share your memories.