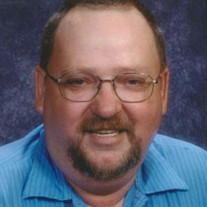 William “Bill” Dawson, age 72 of Gilmore City, passed away on Tuesday, June 14, 2022 in Sioux City. Mass of Christian Burial will be 10:30 AM on Saturday at St. Mary’s Catholic Church in Humboldt with Rev. Thomas Hart celebrating. Burial will take place at St. John’s Cemetery in Gilmore City. William Fredrick Dawson, the son of Ernest and Viola (Schoettmer) Dawson, was born on May 30, 1950 in Fort Dodge, Iowa. He graduated from Humboldt High School in 1969. Following school, Bill joined the U.S. Navy and served during Vietnam on the USS Midway. On July 25, 1975, he was united in marriage with Mary Vanderhoff at St. John’s Catholic Church in Gilmore City. Bill was the head custodian at Humboldt Schools for many years. He was a member of St. Mary’s Catholic Church in Humboldt and the Gilmore City American Legion. Bill enjoyed working outside, especially in his garden. He liked to feed the birds, fish, and hunt. He also enjoyed talking about cars. Left to cherish Bill’s memory are his wife of 46 years, Mary of Gilmore City; his children, Rachael (Brad) Dawson of Glendale, AZ, and Lisa (Joe) Stoneburner of Boone; his brothers, Vern (Maria) Dawson of Georgetown, TX, Larry (Susan) Dawson of Altoona, Tom (Nancy) Dawson of Gilmore City, Bob (Thim) Dawson of Glendale, AZ, and sisters, Linda (John) Olesen of Rockwell City, Virginia (Donald) Jerde of Callendar, and Sheila Smith (Ron) of Otho and several nieces and nephews. He is preceded in death by his parents, Ernest and Viola; and brother, Don.

The family of William "Bill" Dawson created this Life Tributes page to make it easy to share your memories.

William “Bill” Dawson, age 72 of Gilmore City, passed away on...

Send flowers to the Dawson family.