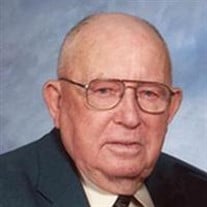 West Bend...William Richard "Dick" Brown, 93 of West Bend died Thursday December 7, 2017 at the West Bend Health and Rehabilitation Center. Services will be held Monday, December 11, 10:30 AM at the United Methodist Church, West Bend with burial to follow in the West Bend Cemetery. Visitation is from 2-5 PM Sunday at the church. Harris Funeral Home of West Bend is in charge of arrangements. Richard "Dick" Brown, the son of Alvin and Tassie (McFarland)Brown was born September 1, 1924 in West Bend where he was raised and received his education, graduating from the West Bend High School. On March 30, 1947 he was united in marriage with Marjorie Perkins at the United Methodist Church in West Bend. Dick and Marjorie lived and farmed in and around the West Bend area during their married lives, moving to town in 1992. Survivors include his children: Raymond (Linda) Brown of West Bend, IA, Elaine (Leonard) Nicol of Ankeny, IA, Ronald (Kay) Brown of West Bend, IA, and Sheila (Ronald) Balek of Manly, IA; 19 grandchildren, and 27 great grandchildren. Dick served on the West Bend School Board from 1964-1974, was a 4-H Leader for 20 years, a National FFA Alumni member, and was an exhibitor for the Clay County Fair for 25 years. He was a member of the United Methodist Church, enjoyed gardening and loved playing cards with Glenn and Marge Schellhammer. Dick was preceded in death by his parents, wife, Marjorie in 2012, granddaughter Jennifer Nicol and brothers Rex, Robert and infant brother Jimmy. www.harrisfuneralservices.com

The family of William Richard Brown created this Life Tributes page to make it easy to share your memories.